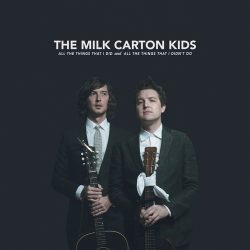 The Milk Carton Kids are Joey Ryan and Kenneth Pattengale. Up to now an acoustic duo who are gaining growing recognition and acclaim, but for their latest release ‘All the Things That I Did and All the Things That I Didn’t Do’, their sound is expanding to incorporate a full band and all the extra dynamics that can bring. Nominated for two Grammy awards and Americana Music Association Award-winners for best duo there is anticipation of quality in the air.

“We wanted to do something new,” Pattengale says. “We had been going around the country yet another time to do the duo show, going to the places we’d been before. There arose some sort of need for change.”

“Musically we knew we were going to make the record with a bigger sonic palette,” says Ryan. “It was liberating to know we didn’t have to be able to carry every song with just our two guitars.”

The music is delicate and relaxed. The pace is mellow and the mood is quiet and reflective. It is a band but it is never overwhelming. Opener ‘Just Look at Us Now’ is a masterful scene setter. It captures the spirit of the record well. Subtle harmonies, orchestration and playing cover the songs like a familiar blanket as the album progresses.

Lyrically there is depth. Reflective of the political climate but not preaching. ‘Mourning in America’ is a highlight. This is undoubtedly a personal set of songs which are well constructed and mature.

The Milk Carton Kids tour extensively and their past collaborations are truly impressive; Emmylou Harris, Chris Hillman and T-Bone Burnett are just some of the highlights. There are too many to mention. The band itself draws on a cross-section of Americana talent for the album and the craft and musicianship is apparent. This is a release that is personal, authentic and powerful. It is subtle and quiet in a good way. Highly recommended.

About Denis Parkinson 14 Articles
Musician and writer based in Liverpool, England. Denis spends his time making music, listening to music, talking about music and writing about music. What else is there?