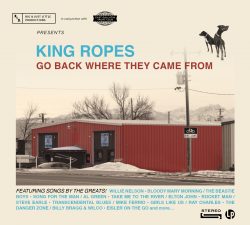 Opinion can be really quite polarised when it comes to covers. For every great new interpretation of an old song there can be others that are dismissed under the “if you can’t improve it then why bother” category. ‘Go Back Where They Came From’ by Montana based King Ropes is an album full of covers that could quite easily slip into either category.

Frontman Dave Hollier’s stated intention in putting the album together was to interpret these songs in a way that takes them far away from their original context and, in some cases at least, it is fair to say he has succeeded in that intent. Take as an example Roger Miller’s ‘King of The Road’, a two-and-a-half-minute classic turned here into something close to double that in a blaze of psychedelic guitar and pedestrian and persistent drumbeat.

Maybe different interpretations of songs can be reviewed more dispassionately if the original is unknown to the listener, ridding the mind of that unhelpful, nagging comparison that will inevitably impact on the review. Maybe that is the reason why Elton John’s ‘Rocket Man’ falls into this same category here and why the album closer ‘The Danger Zone’ should have been left well alone and in the safe hands of the inimitable Ray Charles.

Perhaps it is just that some songs simply lend themselves better to being covered than others. ‘Take Me To The River’ is an Al Green original and the deep groove and rhythm with which Hollier has infused his version here stands comparison and is the high point of the album. However, in this case, and with others on the album such as Steve Earle’s ‘Transcendental Blues’, the interpretations are good ones but they seem to fly in the face of the stated intent of showcasing the songs in a completely new way. They aren’t a million miles away from their origins and they sound all the better for that.

A mention here also for ‘Neighbourhood 4 (7 Kettles)’ which although, again, is a close fit to the original by Arcade Fire, some nice use of drum rhythm and guitar identifies it probably as the one song that can definitively be argued to be an improvement on the original.

The heart of Americana lies in great songwriting and it is difficult to see an album of covers, however well such an eclectic mix of songs may have been interpreted, having a wide appeal to this audience.

An uneven album of covers with occasional highlights