Willis Alan Ramsey was not only in at the start of the Austin music scene of the ‘70s but he was also one of the first of the new wave of singer-songwriters, subsequently tagged as progressive country, to get a contract with a major label. His first self-titled album, released in 1972, contained eleven self-written tracks and ten have subsequently been covered by other artists including Jimmy Buffet, Sam Bush, Jerry Jeff Walker, Lyle Lovett,

Shawn Colvin, Jimmy Dale Gilmour and Waylon Jennings among many others. Additionally, Lyle Lovett and Shawn Colvin have named him as a prime influence. Jan Reid in his ground-breaking 1974 book on the early days of the Austin music scene, ‘The Improbable Rise Of Redneck Rock’, devoted a whole chapter to him. Despite this glowing resume don’t be too surprise if you haven’t heard of him because he has only ever issued one album despite remaining active in the music business for nearly 50 years, though at a very sedate pace.

The Ramseys were a Birmingham, Alabama, family and Willis was born there on March 5th 1951, moving with his family to Dallas when he was a child. This had a major influence on his future songwriting as he is much more of a southern songwriter than simply a Texan one in style and content. He was active in his high school’s musical shows and choirs demonstrating an early aptitude for music. He realised he wanted to be a songwriter and he approached James Taylor’s producer for a deal but was unfortunately actively discouraged from pursuing a music career. Still wanting to make a career as a songwriter, he moved 200 miles away to Austin to attend The University Of Texas and try his luck in the emerging music scene.

At the time, Austin had not yet developed a significant music scene but the basic ingredients were already in place. First, Austin as state capital housed the legislature and the University Of Texas and this meant it had a transient population that had an interest in nightlife. It also had The Armadillo World Headquarters, known locally as the ‘Dillo, which was a disused armoury that had been converted into a music venue with a 1,500 capacity, cheap entry price, cheap beer to attract younger drinkers now the legal drinking age had been reduced to 18 and a tolerant attitude to cannabis smoking.

This ensured there was a ready-made audience and venue for a mix of country and rock musicians, both established and up and coming, including Willie Nelson, Waylon Jennings, The Sir Douglas Quintet, Ray Charles, Commander Cody And His Lost Planet Airmen and others, to play in Austin. This helped other smaller venues to develop, which in turn attracted more aspiring musicians helping establish what became an internationally recognised music scene.

Willis was performing on the coffee house circuit surrounding The University Of Texas when Leon Russell, supported by The Allman Brothers Band, played a concert at the University. At the time Leon Russell was not only a major star but he was also part owner of an artist-friendly record company, Shelter Records. He managed to get to Leon and played a couple of his songs for him. Leon was impressed enough to invite him to Los Angeles for a formal audition for the label. The audition was successful and songs for an album were recorded in Los Angeles, Memphis, Nashville and Texas with leading musicians of the time and was produced by Willis and Denny Cordell, Leon’s partner in Shelter Records.

The album was recorded over 1971-1972 and what is amazing is that Willis was only 20 and Shelter let him record his songs in versions that were to his satisfaction. Townes Van Zandt said “There are only two kinds of songs, there’s the blues and there’s zip-a- 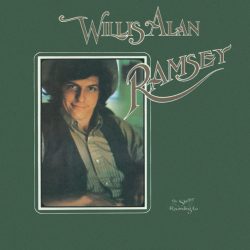 dee-doo-dah”, and while Townes got his blues inspiration through Lightnin Hopkins with Willis it was Robert Johnson. The album is about the songs first and not simply the country rock that was in vogue at the time. It is absolutely timeless and sounds as fresh as it did on its first release. The album kicks off with a story song about a petty thief who rips himself off more than others, ‘The Ballad Of Spider John’, covered by Jimmy Buffet and Sam Bush. If this is the first time you’ve heard Willis then the opening acoustic guitar licks and his southern tenor mixed with a Texan drawl singing “Spider John is my name, friends,” is about as good an introduction as you would want. ‘Muskrat Candlelight’ is next and is a song about rodent love. America recorded a version as ‘Muskrat Love’ and Captain and Tennille adapted it further. However, both versions lost the inherently irony and humour of the original version which features only Willis and Leon Russell on vibes and electric piano. You can’t control who records your music or what arrangements they use,  you can only ensure you get your royalties. Animals and animal love have featured in various Willis songs over the years including a dog and a catfish in ‘Positively’, covered by Eric Clapton in 2005 with Willis on acoustic guitar,  on Jamie Oldaker’s ‘Mad Dogs and Okies’ compilation album. Woody Guthrie was also a major influence on the young Willis and ‘Boy From Oklahoma’ is his recognition of this. Willis earned brownie points with Texans with ‘North East Texas Women’ and the lyrics “North of Waxahachie, east of Cowtown them Dallas women standin’ upbeat the others lyin’ down”. ‘Satin Sheets’, Willis’s own song not the Jeannie Pruett track, was covered by everyone from Waylon Jennings to Shawn Colvin and is his ode to rock-star success and excess. While ‘Angel Eyes’ is Willis’s own favourite track it is the one track that has never been covered but he did give a solo rendition at Lyle Lovett’s wedding to Julia Roberts.

With such a perfect album as your debut you would have expected a glittering career for Willis but that was not the case. The album did nothing commercially on release though other artists did pick up on it. Some have said Shelter didn’t promote it properly but Willis has said Shelter arranged various gigs for him but he refused some such as a tour supporting Delaney

Bramlett because he had idealistic views of how promotors and managers got between an artist and their audience. While his relationship with Shelter became strained over the slow delivery of a follow-up album they did fund a four-track home studio for Willis and gave him an income when he needed it and simply froze his contract, rather than cancelling it, when he missed his delivery date for his second album. Shelter closed their doors before Willis’s perfectionist approach could complete a follow-up. He continued to play in and around Texas but got caught out by the Urban Cowboy fad of the late ‘70s so he moved to England to study Celtic songs for most of the ‘80s. He returned to America at the end of the ‘80s as his songs were again gaining traction with a new generation of artists. Lyle Lovett is one of his biggest fans, and as well as covering Willis’s songs on a number of albums he co-wrote ‘That’s right (you are not from Texas)’ with him for his ‘The Road To Ensenada’ album.

Willis has continued to tour, write and record songs since the ‘90s but an album has never materialised. He was reported to be close to releasing one in 2013 but his studio in Loveland, Colorado, was subject to a flood. Currently he has released two new tracks for Austin singer-songwriter  Bruce Robison’s new music multimedia platform  The Next Waltz, named after The Band’s Last Waltz.  Reports circulated in late 2019 that the tracks for a new album have been recorded and supporting musicians include Lyle Lovett, Tim and Mollie O’Brien, Jamie Oldaker and Victor Krauss, Bruce Bouton,  Roscoe Beck and Marcia Ball. So maybe, just maybe, we will finally get to hear a follow-up album to one of the most perfect and legendary albums in Austin and Americana music history. Watch this space but don’t hold your breath.