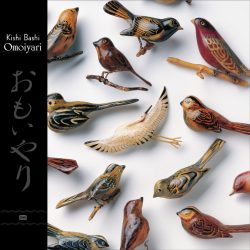 There is no direct translation, but ‘Omoiyari’ can mean the idea that thinking about others promotes compassion, ie altruistic empathy, which is the intent Kishi Bashi delivers precisely with this deeply personal, and bluntly political album. Some background: after Pearl Harbour was bombed, all 120,000 Japanese-American citizens were interned for the rest of WW2, their prisons located way in the interior. Kishi Bashi’s parents moved to the USA as immigrants from Japan after the war.

He says “I was shocked when I saw white supremacy really starting to show its teeth again recently in America. As a minority I felt very insecure for the first time in my adult life in this country. I think that was the real trigger for this project.” A documentary film will follow in 2020, for now we have a stand alone fourth album from the virtuoso violinist/singer-songwriter. Where he was previously more seen as an atmospheres musician, this is a song driven concept album. Lead track is the gentle, misleadingly pretty fable of ‘Penny Rabbit and Summer Bear’ which is in fact an allegory for forced separation. Then ‘F. Delano’ switches the approach with a direct literal attack on the commonly lauded President F.D. Roosevelt who ordered the internments.

The hard-hitting lyrics continue to be matched by breezy arrangements in personal tales such as ‘A Song For You’ and ‘Summer of ‘42’, and this style of playfully optimistic tunes, arrangements and keys around the serious words is purposeful. Unfortunately, it is unsubtle, to a degree that it becomes melodramatic, even trite. The message comes over clearly, the U.S. government was xenophobic and cruel to its own citizens, but long before its end, this album feels worthy. Towards its finish, Kishi Bashi releases some of the balance between his violin and guitar/ banjo led tunes, and lets rip his virtuosity with the gauche ‘Violin Tsunami’, which borrows liberally from Dvorak. With his high gentle falsetto, great care and acutely introspective topic, the album ‘Omoiyari’ brings to mind is ‘Carrie and Lowell’, but whilst Kishi Bashi makes us think, he doesn’t leave us weeping like Sufjan Stevens.