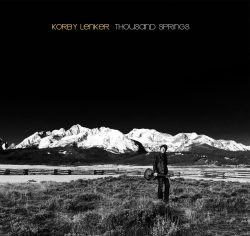 East Nashvillian Korby Lenker does not take easy options. Deciding against traditional studio recording, seventh album ‘Thousand Springs’ was recorded in a variety of personally significant  spaces, including the edge of the Snake River Canyon, a cabin north of Sun Valley and his undertaker father’s mortuary. A guitar, a tent and some recording gear captured the ideas, then an extensive road trip led to recordings with a wide range of folk collaborators.  This honed and edited result is an intelligent, sincere collection of songs that is a travelogue of ideas. The process of production is as interesting as the art itself.

The songs are delicate and gentle. Immediately comfortable to listen to, the music is polished, accessible and varied in style. Opener ‘Northern Lights’ is slow, melodic and beautiful. It’s a song about leaving. It’s that good kind of sad song that makes you enjoy the sense of moving on. As the album progresses the craftsmanship is evident. Serious songs such as ‘Last Man Standing’, which is inspired by Chief Sitting Bull and was recorded near his grave at Standing Rock, sit comfortably alongside playful songs like ‘Book Nerd’ which demonstrates a literary sensibility which is no surprise considering Lenker’s status as a published author of short stories.

Closing song ‘Wherever You Are’ finishes the album with a return to sadness. A sense of loss coupled with a delicate and tender delivery, it’s an understated but powerful, perfect final piece. Throughout the album there is expert playing, varied rhythms and intelligent lyrics. There is a hint of Paul Simon within this music which is no bad thing. Korby Lenker wants you to listen closely but he also wants to see your foot tapping.