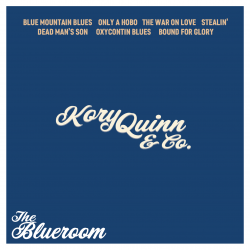 It’s a bit of a challenge to pin down exactly where Kory Quinn is from. Most signs point to Portland, OR but there’s a Twitter account that says Chicago and a Soundcloud page that points to Houston. If it weren’t for the troubles unique to the present moment, he would have spent the past weekend celebrating the release of his new album with a show in Florida. If you didn’t do any outside investigating, you might conclude that Kory is from Oklahoma thanks to a sound that is part Woodie Guthrie and part roughneck. It seems appropriate that it is tough to pin down the singer’s geographical roots because the songs are those of a troubadour, a wanderer, someone who has put in the time and traveled the miles to be able to take the pulse of the nation, deliver a diagnosis, and hazard a prescription.

The songs on ‘The Blueroom‘ are both timeless and timely. They serve as a reminder that some things never change—for better and for worse. They examine themes like forbidden love and eternal devotion, temptation, infidelity, and the security found in the familiar. They juxtapose working and living within a trajectory that arrives at escape in directions that are determined by decisions.

‘Blue Mountain Blues’ starts off slow and builds into a rompin’, stompin’ bluegrass inflected folk holler punctuated with lightning-fast flatpicking. It’s followed by ‘Only a Hobo’, a lament for lost souls that serves as a subtle indictment of a world where some folks live and die unnoticed. ‘The War On Love’ spins a tale of forbidden love played out between an unstoppable force and an immovable object. ‘Stealin’’ and ‘Dead Man’s Son’ are the night and day of a working man’s life. ‘Oxycontin Blues’ and ‘Bound For Glory’ illuminate the choices we have as we move down the paths that will ultimately lead to the exit.

Quinn is a fine songwriter and he has an excellent voice. The “& Co.” of the outfit supply him with a solid musical foundation and picture-perfect harmonies. Together they’ve made an album that manages to feel familiar and comfortable without sacrificing any energy or vitality. The album strikes a chord that needs to be heard.

From hootnanny to heartache and everywhere in between