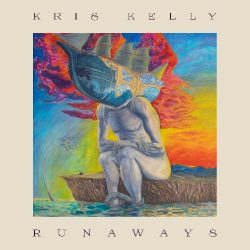 Kris Kelly’s self-released album ‘Runaways’ is packed full of evocative lyrics and otherworldly vocals set to a backdrop of chamber pop and folky guitars. Kelly wrote the album following a stint travelling in South America. It was during this time that he met his now husband. The album vocalises themes of journey, home, love and loss.

Kelly was trained in classical vocal performance and music composition at New York University. The use of classical instruments like cello, clarinet and French horn can be heard throughout. The result is a gorgeous multi-layered, almost orchestral sound. Kelly also invited a range of musicians and producers to work on the album with him (they brought a range of experience between them having worked with Tori Amos, Father John Misty, The Lone Bellow and Lana Del Rey to name a few).

Album opener ‘Birthplace’ is clearly about his time spent travelling. The song speaks of running away from reality with lyrics like: “He blew in light as a feather, on the wings of a drifter, he’s floating high on the freedom, and I thought that he might be a runaway too.” There’s also a very strong sense of home in all this transience: “We run rootless all through the garden like children…This is wild love. This is our birthplace, now.” It is a beautiful and meandering track with Kelly’s sweet and delicate voice leading us meditatively through this journey.

‘We Flew’ was written about his husband and has the sentiment of flying in the face of homophobia. Delightfully happy and upbeat, Kelly proclaims “When I forget and give you a kiss, I don’t do it to show it to the world.”

‘Cracked Porcelain’ is darker in theme and tackles what happens when an open relationship starts to go wrong. It’s brutally honest and the conversational lyrics make it even more uncomfortable to hear: “It’s just a game, they don’t mean a thing to me.” Well, that’s what we said. “Why should we stop? We can handle it.” But we couldn’t see what we’d sacrificed for our game/Until our love fell apart like cracked porcelain.”

The album has a meditative quality and Kelly’s elegant and classical delivery makes each song feel like an epic. The layering of vocals and harmonies creates a richness of sound like a soundtrack to a film. Fitting perhaps, as Kelly uses the album overall to create a personal coming of age story.