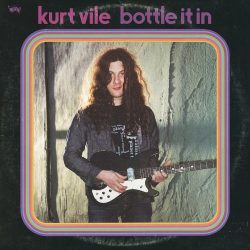 I wrote five separate reviews for this, changing every time I listened to it, liking the tracks that are likeable more with every listen. But, you know, four songs make up 37 minutes of it, so the tracks and the bits that aren’t as likeable, just get less so. I’m explaining that away with how great the likeability of the likeable songs is. I was talking to a friend about Kurt Vile the other day, and War on Drugs, and I wondered if you could really like Kurt Vile if you already liked Dinosaur Jr and yes, I know he’s likely heard that a million times, but still. It’s why I never really liked War on Drugs. I’ve never been a fan of Springsteen.

The record, yeah! Well, it starts off great, the opening 1-2-3 punch(es) of ‘Loading Zones‘, ‘Hysteria’ and ‘Yeah Bones’ are as good as it gets with some exhilarating guitar, but then it hits its first speed bump. ‘Bassackwards’ and, like, 10 minutes is a long time to ask someone to stick around, man.

Given ‘Bottle It In’ was recorded on the road, it’s perhaps a little mean spirited to begrudge a man some jam time in the studio, hoping to recreate the joyous jams birthed onstage, it’s just that the aforementioned tracks – along with the glorious ‘One Trick Ponies’, the utterly fabulous ‘Rollin With The Flow’ and the tender and affecting ‘Mutinies’ (with secret guest Kim Gordon) – are fat free brilliance. The LP as a whole? Not at its fighting weight.