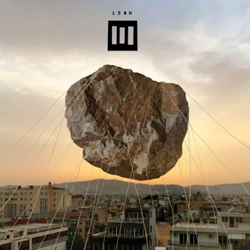 Leon III (or Leon the Third if you prefer, their PR blurb mentions both) are a side project of two members of a Virginia alt-country band, the Wrinkle Neck Mules, a band this reviewer had never heard of. Before we get to the main thrust of this review however, do yourself a favour and check them out. Comprised of Andy Stepanian and Mason Brent, respectively singer and guitarist of those Mules, Leon III move away from the more traditional sounds of the parent band into a kind of blissed out cosmic Americana with both of them citing the good old Grateful Dead as an inspiration and certainly throughout the album the gleeful countenance of Jerry Garcia can be imagined as the grooves spin.

Joined on the album by some fine players (including drummer Brian Kotzur pianist Tony Crow, pedal steel player Pete Finney, pianist Tony Crow, singer Jordan Caress, and guitarist Chris Scruggs, grandson of Earl) who collectively have graced albums by the likes of Will Oldham, Silver Jews, Justin Townes Earl and Andrew Bird, the pair deliver a set of expansive and slowly paced numbers which at times have a hazy blur to them while others seems to have been beamed down from the cosmos. Elements of Brian Eno’s ‘Apollo: Atmosphere’s and Soundtracks’ and Black Cab’s ‘Altamont Diary’ can be glimpsed here and there but the whole affair is tethered firmly to the ground by the earthy and gruff tones of Stapanian’s voice with a song such as ‘The Strongest Medicine’ not too dissimilar to Son Volt.

That’s really the beauty of the album. The songs can all fit into an “alt-country” tag – rootsy and ragged with an undertow of tough guitars – but many of them are embellished with that slightly psychedelic sheen which allows it to stand it from the crowd.  This pairing is evident from the opening bars of ‘Maybe I’m Immune’ as a brief piano line and a cosmic Garcia guitar ripple lead into the song before Stapanian steps up with what seems to be a somewhat metaphysical exploration of the human condition, the music initially a slow country thump before rousing itself into a thrilling crescendo with Stapnian become more and more excitable and then bowing out with some more curlicued cosmic guitar. ‘Faded Mountain’ is a much more comfortable listen, a gloriously sweet melody with gliding pedal steel dominating,  it’s a balm compared to its predecessor and the following ‘From These Heights’ (aside from some snatches of radio static at the beginning) continues in a similar vein seeming almost weightless as it hovers about the listener, the pedal steel again floating over the words although banjo and mandolin do add some gravity and a crashing guitar solo towards the end signals the return to earth.

There’s a wealth of treasures to be unearthed here. The almost waltz like dizziness of ‘Paper Eye’ which is speckled with odd sound effects and dashes of alien guitar and synthesisers sounds like a Martian Handsome Family. The gritty ‘Alberta’, a howl of pain with a symphonic sweep is astounding while ‘Between the Saddle and The Ground’ (a song inspired by their reading of the inspirations behind the Dead’s China Doll) is a well tempered country rock song in the manner of The Band. There’s an excellent nod to Garcia in the brief intro to ‘The Strongest Medicine’ but the band also reach out to some unexpected forebears on an unexpected cover of The Velvet Underground’s ‘Jesus’ which fits in well with the album’s lyrical theme of searching. Although it’s not radically rearranged it’s a powerful reading of the song.

This is one of those albums which repays repeated listens as it gradually unveils itself. It’s bold and adventurous, demanding at times but ultimately rewarding.

A fine album which flies the flag for cosmic American music