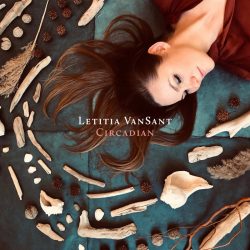 Circadian Rhythms are the natural cycles that occur, “Within a period of wakefulness and sleep, of light and darkness”, and it is this that informs Letitia VanSant’s latest collection of songs.  On first hearing they sound like they are more straightforwardly about relationships; starting with, ‘You Can’t Put my Fire Out’, relating the story of an abusive male; continuing with ‘Tin Man’, an account of yet another man having difficulties with, and the expression of, his emotions.  Farther into the album, we have themes of broken dreams, regret for things not done, laments for the complexity of modern life, loss of faith and the poisoning of VanSant’s father with Agent Orange. The title track, ‘Circadian’, explores the disruptions of modernity on the natural world and the loss of a simpler previous existence.  “The music the world made before / We drowned it all out with these machines”.

VanSant has a strong and confident voice and her best work occurs when she reins back a little and focuses on a measure of subtlety. Tracks such as ‘Spilt Milk’ and ‘Rising Tide’ sounded harsh in terms of the vocal and the backing instrumentation. ‘Circadian’, which I think you may find the best track on the album, is more restrained and easier on the ear.

Going back to VanSant’s first album, ‘Gut It to the Studs’, (a rather pleasing image of a building under complete renovation) to check out where she was at in 2018 when that first album was released, AUK’s Paul Kerr commented on the particularly pleasing influence of upright bass and violin. The whole album was more sparse and affecting and VanSant’s voice came across more successfully. ‘For What it’s Worth’ has a gorgeous slinkiness that adds a whole lot to the original, being reminiscent of the Cowboy Junkies.

You may find the occasionally harder sound of ‘Circadian’ less pleasing, though that is not to say that there aren’t a good many satisfying moments waiting for you – we are after all looking at an award-winning and much-lauded artist.  VanSant has a well documented previous life as a member of a progressive lobby group in Washington D.C. – whilst she has changed career direction she is still a local activist described as being deeply interested in spirituality and social justice.

There are some telling lines in her songs – ‘Rising Tide’ reminds us that,  “They’ve got plans for our pockets, cigarettes for our lungs / Poison for our babies and bullets for our guns”. ‘Most of Our Dreams Don’t Come True’ suggests that,  “The hardest part of letting go / Is having nothing left to hold” ‘Tin Man’ concludes with his affecting image, “Every morning you leave without saying goodbye / Your coffee on the countertop growing cold by my side”.

So Van Sant can write an interesting lyric and she has a great voice though shouldn’t strain too hard. However, it is the case that her music is better served by a light touch rather than that found on the new album. Not to say that they are not a gifted group of musicians, just that you may prefer her in a different context. ‘Circadian’ has a different sound and feel to that of ‘Gut it to the Studs’.  Take your pick but you will probably find the latter more satisfying.

A slight change of direction but not perhaps for the better