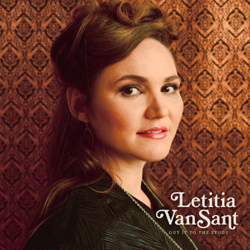 Giving up a career in social and environmental advocacy to take up music full time paid off for Baltimore based VanSant when she won the Kerrville New Folk song writing competition joining the ranks of previous winners such as Lucinda Williams and Nanci Griffiths. ‘Gut it to the Studs’, her first album since permanently switching on her out of office email response is a powerful collection of intimate songs buoyed by a superb band who can wax and wane as the songs demand.

She’s a swell singer, her voice clear as crystal while also able to delve into a soulful moan on the slow slink of ‘Wild Heart Roam’ which has a resonator guitar building up a sense of menace. She even manages to energise what one might presume would be a fairly redundant cover of the well known ‘For What it’s Worth’ with a powerful vocal performance while the band (and in particular Alex Lacquement’s stand-up bass) man the barricades giving the old chestnut a vibrant folk rock outing. VanSant has said she recorded the Buffalo Springfield song in tribute to past protests and, “As a reminder that the present moment is just as critically important to our nation’s history.” However the album is not a collection of protest songs as VanSant prefers to register her concerns more obliquely with ‘Dandelion’ an epic environmental plea which picks up where Joni Mitchell’s ‘Big Yellow Taxi’ left off while ‘Sundown Town’ addresses the media fuelled fears of the outsider which engenders segregation. The title song uses the metaphor of stripping down a house to its core in able to rebuild with VanSant declaring her intention to raise, “something level, something true,” while admitting that as she sits comfortably at home reading the environmentalist writer Wendell Berry, refugees are perilously marooned in fragile little boats.

VanSant evokes images from nature on several of the songs with ‘Sweetbay Magnolia’ a delightful little speckle of a song recalling an old relationship while ‘The Field’, another stripped back number, compares her soul to a parched and barren land although there’s hope in the nourishing water hidden under the earth. ‘Bluebird’ meanwhile is a darker song suffused with melancholic memories. Throughout the album the band are superb as they create a warm and succulent sound using in the main just an incredibly versatile upright bass, guitars, fiddle and occasional organ and percussion. They excel on ‘Gonna Sit by my Fire’ which has VanSant inhabiting the mantle of a Good Samaritan offering succour to those who need it and on the ethereal ‘Taking Back the Reigns’, a song which revisits the sense of renewal on the title song.

Listening to this album one is reminded at times of Courtney Marie Andrews’ ‘Honest Life’. Not that it sounds similar (although there are moments when the two collide) but in that this is a wonderful collection of heartfelt songs delivered by a great songwriter with a glorious voice.

A finely understated call to arms from this social activist