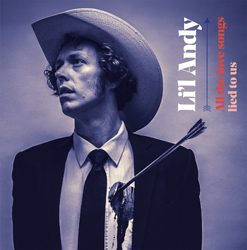 The ghost of Leonard Cohen looms large over the new album by Montreal’s Li’l Andy – in fact, the music for the title track, ‘All The Love Songs Lied To Us’, is based on Cohen’s 1984 song ‘Coming Back To You.’  The similarities don’t end there – like fellow Canadian, ‘Laughing Len’, Andy is a singer-songwriter with a rich, deep voice who tackles subjects such as love, loss and war.

A country-noir crooner, he has admitted that the production and style of Cohen’s early albums shaped the sound of this record – it’s as if Andy’s got hold of his hero’s famous blue raincoat and is trying it on for size…

‘All The Love Songs Lied To Us’ – the song – is a wry, amusing and cynical look at how romance has been represented – and misrepresented  – in pop songwriting.

Over a sparse arrangement of pedal steel and strings, Andy takes a swipe at Macca and The Beatles – “All the love songs lied to us – they said, ‘love is all you need’ – if the world was only as simple as Paul McCartney would have you believe…”

On the honky tonk song  ‘Ahhhhhh… Loneliness’,  he comes across like a Hank Williams for the social media generation – “again at the diner, on my own, I’m having breakfast with my phone”– “I’m up in the morning and on the Internet – whatever affirmation that I can get…”

Your tweeting heart, anyone?

The dramatic ‘Limestone Song’ is pure Cohen – a graveside lament with haunting, mournful violin, while ‘This Is Heartbreak’ is heavy with gallows humour – “I want to die and I hope you’ll be a mess – I want to see you at my funeral – I want to see you in a little black dress.”

Death crops up again on ‘The Lives of Others’ , but the song is one of the album’s more throwaway moments – a breezy, catchy country bossanova featuring Ariel Engle of Broken Social Scene.

‘All The Love Songs Lied To Us’ is funny, moving, morbid and romantic – there might be a tear in Andy’s beer and, judging by the album artwork, an arrow through his heart, but more often that not, there’s also a tongue in his cheek…

Leonard Cohen hanging out with Hank Williams in a late-night, roadside diner and singing songs for the lost and the lonely