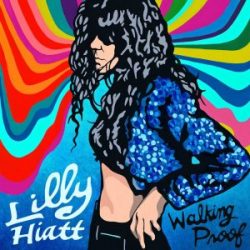 It can be surprisingly difficult to establish a long-term career as a musician if you have a parent who is also a successful musician. Obviously you get first hand knowledge of the music industry, and you will get help with starting your career, but very quickly you will find you will, more often than not, be in competition with your famous parent, and, if you don’t come up with the goods quickly enough, interest in you will fade. This makes it particularly hard for Lilly Hiatt, as she is in competition with one of the best current songwriters in America, her dad John Hiatt. However, if the cover of ‘Walking Proof’, her fourth album, with its vibrant and strong colours is anything to go by, Lilly Hiatt is enjoying her music and is full of confidence about the future, and so she should be, as this is her best album to date.

As well as being John Hiatt’s daughter, Lilly is also, more importantly, part of an emerging sound in Nashville that is neither old-style country nor the typical Americana of the last twenty years or so. While the music has echoes of country and country-rock, it is vibrant, very much like the cover of ‘Walking Proof’, and is electric guitar-centric in an alt-rock way. However, this is still Nashville and strong songwriting is always at the heart of any good music made there.

Like her father, Lilly Hiatt lives life to the full, and she has paid the price of dependency and broken relationships.  She also uses her experiences to drive her songwriting. The songs on ‘Walking Proof’ were written when she was holed up alone in her Nashville apartment with her cat, reflecting on recent events in her life. She worked with ex Cage The Elephant guitarist Lincoln Parish as producer who helped her move away from the more traditional Americana sound of her previous albums. Accompanying her are her own band, which provides some continuity with her last album, ‘Trinity Lane’, and her live shows, comprising John Condit, guitar, Robert Hudson, bass, and recently added drummer Kate Haldrup. There is also an impressive list of guest artists including Aaron Lee Tasjan, guitar and vocals, Amanda Shires, fiddle and vocals, Travis Goodwin, keyboards, and Luke Schneider, pedal steel guitar. Finally this album also marks the first appearance of John Hiatt on one of Lilly’s albums which may well be a sign that he thinks she has now developed her own sound and career sufficiently that his guest appearance on vocals will not distract from the main event.

‘Walking Proof’ opens with ‘Rae’, a song about her relationship with her sister that has a beautiful melody and features Lilly’s vocals supported by a tremolo guitar riff. While the song explores her relationship, it ends positively with “Nobody gets it like you do, Rae.”. Next up is ‘P-Town’ which, while a failed relationship song, is upbeat with plenty of fuzz guitar emphasising Lilly’s new more confident persona. ‘Some Kind Of Drug’ considers the homeless population in Nashville which is now one of the fastest growing cities in America, with a rock guitar accompaniment and additional, unobtrusive vocals from her father, John. The album includes two country songs, the title track, which has echoes of mountain music, mixed with electric guitar, and ‘Drawl’, which calls for everyone to maintain their idiosyncrasies rather than conform. ‘Brightest Star’ features Lilly’s Rickenbacker guitar in its full glory, and was the lead single from the album. The guitar sound on ‘Never Play Guitar’ is enhanced by guest Aaron Lee Tasjan while Lilly discusses her approach to songwriting. ‘Move’ has a great steel guitar track and looks at life’s various challenges and finishes with “The only thing you know how to do is move”. The album closes on a quieter note with ‘Scream’ where she says “I swear to God I’m done with him”.

Lilly Hiatt has made the best album of her career and is helping to forge a new sound and direction in Nashville music, while still honouring the best traditions of that city. John is on record saying how proud he is of his daughter, marvelling that she attained her new level of achievement by her own actions and determination. If you want to sample what is happening now in Nashville then there are not many better places to start that ‘Walking Proof‘.

About Martin Johnson 86 Articles
I've been a music obsessive for more years than I care to admit to. Part of my enjoyment from music comes from discovering new sounds and artists while continuing to explore the roots of American 20th century music that has impacted the whole of world culture.