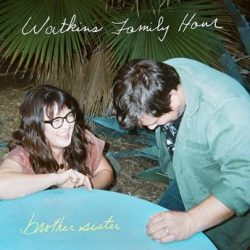 When two-thirds of the Grammy-winning bluegrass outfit Nickel Creek find themselves with time on their hands in their home base of Los Angeles, it makes perfect sense that they set up shop as the house band for a local venue. That’s what Sean and Sara Watkins did back in 2002 during a hiatus and Largo became the place to be for a whole host of LA musicians who wanted to join in on the fun.

Over more than a decade, Watkins Family Hour grew from a monthly variety show to a 2015 debut album that featured appearances by the likes of Fiona Apple and Benmont Tench. So, there is good reason to be excited at the prospect of a new album of mostly original material from the duo.

For ‘Brother Sister’ Sean and Sara Watkins worked with producer Mike Viola. It’s a more stripped-down sound than the pair’s previous release and that might take a little getting used to for some listeners. The presence of bass, drums, keys, peddle-steel, and more on the previous release brought an energy that simply isn’t there on the new album. The songs are as carefully crafted and as beautifully executed as anything else that we’ve heard from the pair. Craftsmanship and execution are great but many of the songs fail to register the kind of direct hits that make an emotional impact.