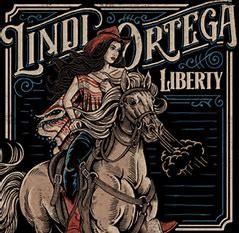 Canadian singer-songwriter Lindi Ortega has deployed a new approach with a sound that moves away from her traditional roots-influenced sound into what can be described as a more cinematic sound. ‘Liberty’ has a big, sweeping soundtrack feel to it with lush arrangements and songs that quite simply don’t do what you would expect. There is nothing obvious about the melodies or chord progressions in this collection of smouldering vignettes.

Album opener or overture ‘Through the Dust Part 1′ makes more sense when you realise that a passion for Ennio Morricone has heavily influenced Ortega’s writing and teaming up with fellow Tarantino fan in Nashville producer Skylar Wilson has certainly led to some evocative ‘Spaghetti-Western’ soundscapes. From here on in, the album unfolds as a narrative, tracing the fall and rise of the central character.

‘Til My Dying Day’ is a touching tale of lost love with mournful pedal steel evoking an almost ‘Miss Faversham’ scene. ‘The Comeback Kid’ is a defiant contrast which signals something of turning point as the album builds towards standout tracks ‘Lovers in Love’ and the title track ‘Liberty’ before closing with Ortega’s first recording in her father’s native Spanish, ‘Gradias A La Vida.’

‘Liberty’ is a bold concept that generally works very well. An imaginative and atmospheric experience.