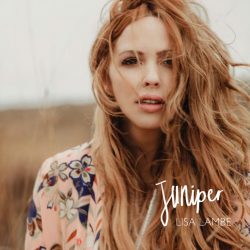 Dublin born singer-songwriter Lisa Lambe is already well known in her native Ireland. Her three-year stint in Celtic Woman, as well as a successful acting career, brought the commercial success that enabled her to record her first solo album ‘Hiding Away’ in Nashville which she then self-released in 2015. She has since signed for US label Blue Élan Records and ‘Juniper’ is her first release for them. The record has been available in Ireland for some months but now gets a UK release, it having been postponed during lockdown.

From the opening song ‘North Star Rise’, it is clear that Lambe’s PR claim that she has a “ridiculously gorgeous voice”, for once is not overstated. Nevertheless, a fabulous voice alone does not itself guarantee a great record. Fortunately, Lisa Lambe is also a very accomplished songwriter; all eleven songs in this collection were either written or co-written by her. The largely acoustic instrumentation and sympathetic Karl Odlum production gives Lambe the opportunity to express herself in a way that showcases the songs as much as her vocal performance. The songs were recorded live in a single room after being written  in Connemara, a quiet and isolated part of western Ireland. This isolation and togetherness with her musicians  confer a warm and serene feeling upon the record.

With titles like ‘Hunter’s Moon’, ‘Dust and Sand’, ‘Holding Back the Tide’ and title track ‘Juniper’ Lambe has described the album as a “love letter to nature”. Nature provides the backdrop and the context to songs about people, places and relationships rather than the central theme. Lisa Lambe is not on an ecological campaign here, but her love for the natural environment is clearly apparent in her writing. This dovetails perfectly with the light touch production and unforced accompaniment to give the whole project an agreeable organic feel to it.

With ‘Juniper’ Lisa Lambe has created a beautiful record. It has the air of an artist discovering herself, creating her own music and above all being true to her own artistic inclinations. After Celtic Woman it would have been easy for Lambe to have pursued more commercial follow-ups. That she has chosen to go the way of creativity and originality, is something to celebrate and if she continues to make records of this quality, it will be a decision well vindicated.