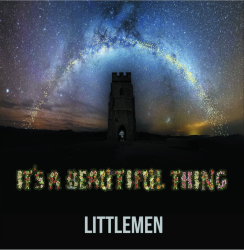 Littlemen, emanating from the west of England, have previously released the well received album, ‘Long Road Home’. They now have a new line-up led by established songwriter and studio owner, Nick Allen. Other members of the band include: drummer & Grammy Award winning rhythm consultant, Robert Brain, (who has recently toured with Canadian artist Loreena McKennitt) and bass guitarist, Tyler Spicer who also plays with UK Country Artist of the Year, Danny McMahon.

The listener will encounter a varied soundscape on ‘It’s a Beautiful Thing’ ranging from backing bousouki to Celtic flavoured violin and cello accompaniment. ‘The Girl in the Red Blouse’ opens proceedings featuring sax solo and soaring solo guitar crescendos; the latter will become a recurring theme throughout several of the tracks. Country rock territory is explored during, ‘Moving On’ with accompanying guitar work as a prominent feature.

Allen was involved in a horrific motorcycle accident several years ago which has taken away his ability to walk. The next three tracks: ‘Walking’, ‘The First Time’ and ‘Obstacles’ deal candidly with Allen’s courageous struggles since the accident and his longing to be able to stand and walk again. These are moving and thought-provoking pieces that lead to reflection on how much is taken for granted in our lives and what to be thankful for.

‘Twist of Fate’ is a Celtic flavoured lament whilst, ‘Front Page News’ objects to the trivial, image conscious media and its objectification of women whilst providing a catchy rock feel reminiscent of the spirit of Tom Petty. ‘Cat Song’ sees the band rocking out in a way that might keep good company with The Eagle’s ‘Life in the Fast Lane’.

There is much to savour here in terms of thought provoking themes and different moods. At times the overall sound feels slightly over produced and occasional mis-placed backing vocals would perhaps have been better left out of the mix. That said, Allen’s song writing skills coupled with the musicianship of the band should ensure that there is much more to look forward to in their future releases.

Songs from the heart rise from the West Country