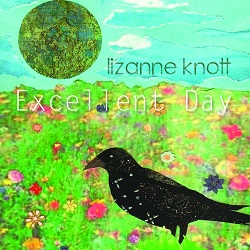 ‘Excellent Day’ is Lizanne Knott’s fourth album, dedicated to long-time friend and guitarist Jef Lee Johnson who passed away unexpectedly. It is also the title of the last song on the album, written by Johnson, and covered by Knott to honour her friend. It isn’t the only cover on the album, with tracks by George and Ira Gershwin, Bruce Springsteen and most notably Janis Ian, who gifts Knott the wonderful track ‘Sometimes’.

The mix of originals and covers works well. Knott’s voice is crystal clear, sometimes stark, but of such quality that it carries the day, drawing you in to the stories and emotion of her songs, with themes of love, loss and redemption. Citing a return to her jazz and blues roots, this is a great album and it is not hard to see why she has a loyal following, inside and outside the industry. With a talented bunch of musicians around her there really isn’t a weak track on the album. From the lilting brass, neat banjo and piano on ‘Not This Time’ to the slick acoustic guitar on ‘Goodbye’, or Erik Johnson’s drumming on ‘Come For The Kill’ it’s all first class. The playing is understated, but powerful. There is no need too try to hard. The songs, arrangement and general good vibe simply nails it.

Swaggering from jazz, to folk, to blues, to New Orleans and the Missisippi Delta, Lizanne Knott and her musicians make you smile, make you think. With music and artists like this, the world is a better place. The poignancy of Knott’s delivery on ‘Sometimes’ is in stark contrast to the fun being had in the final track, which provides an uplifting testimony to her lost friend.

A great album and fitting testimony to the memory of Knott’s long-time friend and guitarist Jef Lee Johnson.