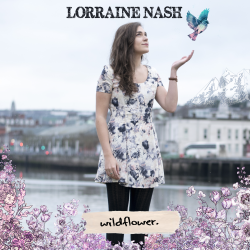 21-year-old Kerry resident Lorraine Nash has released her debut EP ‘Wildflower’ and it is an assured and accomplished collection. Nash’s music is influenced by her love of traditional Irish music but the five original songs on the EP use this as a starting point, blending the sound with country and folk music. She is able to draw upon her multi-instrumental talents (piano, guitar, harp, flute and violin) which she developed since she started to perform from the time she was 7 years old.

The songs seem effortless and unforced but it is evident that she has taken her time and polished them until ready to release them into the world. Her vocal tone is reminiscent of Natalie Merchant or the Be Good Tanyas, delivering her lyrics with light and a little bit of shade. The songs use varying musical styles to explore the themes of the EP, with ‘River’ being the most traditional Irish song and ‘Changing Tides’ sounding more country. Nash’s music is accessible, charming, and has an easygoing nature which captures a strong female vocalist who sounds as if she is having fun recording it.

Her most recent single is ‘Changing Tides’ which since its release has been receiving deserved recognition in Ireland; it is a perfect balm for the uncertain times we are facing right now. She acknowledges that all that we can do is the best that we can do, and she will “..take it as it comes just like I do with the sun, but sometimes the sun gets in your eyes.” The lyrical themes about facing change are ones that are universal and relatable during this global pandemic, although it was written prior to these events.

Lorraine Nash is a skilled musician and talented lyricist who is developing her voice but deserves your attention now. As she sings on ‘Breathe’: “I threw stones in the ocean, set the water in motion.” She could be describing what will hopefully be the start of something special for her.

An assured and accomplished debut EP from talented Irish musician