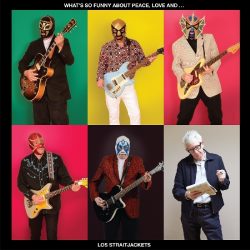 In which Los Straitjackets provide thirteen instrumental versions of Nick Lowe songs. They add their usual twang, and it ends up like a Shadows record without Cliff Richard. Mildly diverting at first and in the end a futile exercise, there isn’t really one song that sounds better as an instrumental, and no version really does anything astounding so you forget the vocal melody and they also slide into cheesy territory as Lately I’ve Let Things Slide shows where the melancholy is replaced with musical a kiss me quick hat.

I’m sure if I’d been to Butlins in the 1960’s I’d have heard sets that sound pretty much like this every night of the week. ‘Cruel to be Kind’ (is not the theme of this review) is slowed down and loses much of the insipid wackiness of some of the other versions but still you want to hear the vocals and that’s the problem with the record – it isn’t skewed enough, or different enough, not radical enough; they are more karaoke backing tracks rather than re-workings.