Loudon Wainwright III has unveiled his new album ‘I’d Rather Lead A Band’ which will be released on October 9th in the UK via Thirty Tigers.  A collaboration with Vince Giordano and his band The Nighthawks, and producer and music supervisor Randall Poster, the 14-song collection is described as “a loose, fresh, and “anti-nostalgic” take on classic songs from the 1920s and ‘30s featuring Wainwright as singer and band leader.” Wainwright will debut two songs from the record acoustically on the BBC Radio 2 Virtual Folk Festival on Sat Aug 1 between 8 and 10pm.

As interpreters of the Great American Songbook, Wainwright and Giordano’s big band go through a supper club set, including songs by Irving Berlin (‘I’d Rather Lead a Band’ and ‘The Little Things In Life’), Fats Waller (‘Ain’t Misbehavin’’) and Frank Loesser (‘More I Cannot Wish You’). 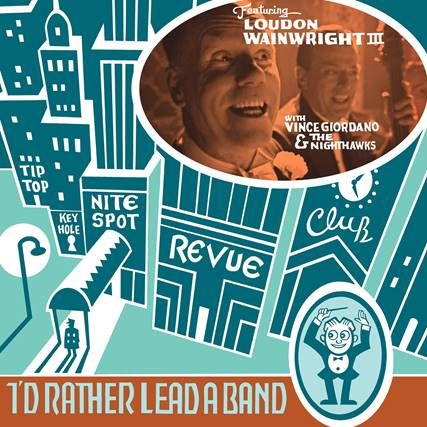 To choose the songs, Wainwright, Poster and producer Stewart Lerman volleyed dozens of mp3s and YouTube videos back and forth, ultimately whittling them down to 14 picks.  The expansive record collection of Loudon’s father – the LIFE Magazine columnist Loudon Wainwright– helped to inform some selections, as did Loudon’s own musical beginnings as a jug-band singer.  Wainwright, Giordano and The Nighthawks then recorded the album in 3 days at Electric Lady Studios.

For Wainwright, I’d Rather Lead A Band was also a welcome chance to take a break from playing his guitar and singing in what he calls his “somewhat misanthropic, occasionally goofy persona.” “I loved the idea of just being a vocalist,” he says. “It was freeing, because I could shed my Loudon Wainwright III-ness. I will no doubt return to my foremost incarnation, but what a pleasure it was to settle back with this marvellous band and sing these songs.”

‘I’d Rather Lead A Band’ Tracklist