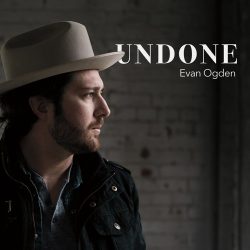 Evan Ogden’s second album ‘Undone’ is an accomplished collection of country ballads with a smattering of folk and protest songs thrown in. Ogden is originally from Austin, Texas and imagery and references to the lone star state are clearly felt throughout. ‘Undone’ is a homage to great country music but also feels like a deeply personal piece. Ogden’s vocals are soft, yet strong, and often drop into a comforting Texan drawl.

The first single from the album ‘You’ve Got to Wonder’ is a true American protest song. Ogden fights against the politicians, the construction that tears up the land, the rising cost of living and the increasing crime, “You’ve got to wonder how much time we got left”. The song stands out from the rest of ‘Undone’ as nothing else really ventures into this arena.

There’s a sense in some of the tracks that Ogden struggles with his relationship with music. He’s yearning for success but it somehow eludes him. On bouncy, honky-tonk track ‘Everybody knows somebody’, it’s like Dale Watson is in town. Yet Ogden sings “It’s the biggest small town I’ve ever seen, everybody knows somebody, so how come none of them ever know about me?”. On the much slower and melancholy ‘These Songs and a Guitar’ we get the sense that the musical gift he has isn’t approved by all of Ogden’s family “Give me my family’s blessing… I want to make my daddy proud”. The rich pedal steel adds depth to the track.

There’s an unusual duo of songs in the ‘Sam Bass Chronicles I and II’. Song one is simply the instrumental version of the second. It was an interesting exercise to hear as the instrumental definitely evoked images of the wild west and outlaws. The lyrics cemented that further through the album. Ogden also explores religion through the album. In ‘Undone’ he starts to question faith, but in ‘Austin Rain’, a soft, country ballad, he seems to be clutching at other ways to express it “With you there’s no doubt in my mind, with you I’m one of a kind…I need you like my grandma’s faith”.

The album takes us from country storytelling to full-on honky-tonk with Ogden skillfully weaving his vocals and lyrics into the music.