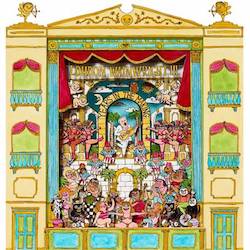 After 45 years in the industry, Loudon Wainwright needs little introduction as an artist. Over 26 albums, he has created a diverse tapestry of music and has dabbled with a wealth of genres. ‘Years in the making’ effectively serves as an ‘audio-biography’ – it is a two disc compendium of rare and unissued tracks drawn from orphaned album cuts, live recordings, radio appearances and home demos. As such, it offers a fascinating window into Wainwright as both a public and a private figure. The presence of such luminaries as Kate McGarrigle, Van Dyke Parks and Steve Goodman (to name but a few) is an obvious reminder of his influence.

A review of this length cannot hope to address all the many facets of this release and so will, instead, hone in on certain choice-cuts. The lovingly compiled selection is accompanied by a 60 page hardbound book illustrated by Ed Steed (winner of a Grammy last year courtesy of the artwork for Father John Misty’s ‘Pure Comedy’). It comes replete with numerous insights into the stories behind the songs and, to further aid the listener, the set is divided into seven chapters: Folk, Rocking Out and Kids (Disc one) and Love Hurts, Miscellany, Hollywood and The Big Picture (Disc Two).

Almost all of the featured songs showcase Wainwright’s gifts – both for lyrical wit and an ability to cut to the bone emotionally. An early highlight from the era when he was touted as a Guthrie-esque troubadour is ‘Roll in my sweet baby’s arms.’ It’s a gorgeous harmony-driven offering slightly reminiscent of Dylan’s ‘Maggie’s Farm’ and could happily feature on ‘Sweetheart of the Rodeo.’ In the Rock chapter, the Leiber/Stoller-penned ‘Smokey Joe’s Café’ grooves marvellously while ‘2 Song Set’ sounds like it should have been on ‘The Basement Tapes.’ On the latter, Wainwright conveys the melancholy of a man who feels out of time via the chorus: “Bobby give me change for a dollar, I want to buy some cigarettes, I want to play some music on the jukebox Bobby, a quarter plays a two song set.” Elsewhere, ‘Your Mother and I’ is heartbreakingly honest in lines such as, “you’ll stay with her – I’ll visit you, at Christmas, on weekends, in the summertime too” and addresses the artist’s split with Suzzy Roche. The tone is notably lighter elsewhere, especially on the hilarious ‘Meet the Wainwrights’ – a live Cayamo cruise recording from the 2015 Wainwright Family Alaskan Adventure featuring Rufus, Martha and the rest of the clan.

Wainwright has admitted that “sonically, it’s all over the place and, at times, noticeably lo-fi.” However, he and his co-producer Dick Cornette decided “…that didn’t matter as much as offering up something that was spirited and representational.” Listeners will surely agree – there is not a dull moment in the two hours of listening on offer here; what shines through is the warmth of Wainwright’s character and his talent for making us want to laugh one moment and cry the next.

45 years of laughter and tears from lyrical master craftsman