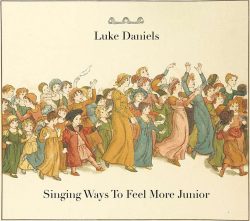 Luke Daniels looks a little like a refugee freed from a Mumford and Sons labour camp. His new album makes use of children’s rhymes for grownups everywhere. That’s enough to set of very loud alarm bells hereabouts. Fear not, the record’s okay (if a little unremarkable) and the beard/braces look is close to being a legal requirement for the self-respecting folkie of today. Daniels is a member of Cara Dillion’s band, also of Riverdance Orchestra. He’s certainly no chancer in the folk music scene. Accordingly this is a solid collection of songs and the children’s rhymes are largely understated; worked into the songs rather than standing out like the proverbial sore thumbs.

Opening track Penny In The Slot is probably the most overtly ‘nursery rhyme-esque’, incorporating a modern fast-food refrain into the chorus. Elizabeth Trump and Sons is a piano blues track about what might happen when an under-loved child, raised on business and finance, tries his hand at politics.. The record closes with a pleasant, jazzy cover of Stevie Wonder’s Don’t You Worry ‘Bout A Thing as a reassurance to children of all ages . It’s tough to call, but this is probably the best track in the collection. Not to say that Daniels’s songs aren’t without some merit (they’re lushly arranged and expertly performed). However Wonder is in a different league to most songwriters and Luke Daniels (generally speaking) offers solid, accomplished but unremarkable contemporary folk.