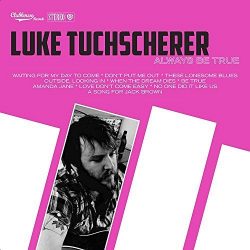 This is the second solo album release from Bedford based singer songwriter Luke Tuchscherer (pronounced Tuck-Shearer) and it is a real cracker. Tuchscherer who previously had a stint as singer and drummer with The Whybirds has written an album which sounds every inch a classic of its genre. This is a real Americana masterpiece with great tunes, mournful lyrics and terrific playing throughout. Recorded in Bury St Edmunds, Suffolk with it seems an all British cast, this shows that home grown Americana can mix it with the very best that our American cousins have to offer.

Opening with Waiting For My Day To Come the bar is set high by a catchy tune with intelligent lyrics telling of longing which probably sums up the state of mind of many of us describing the feeling that something great or meaningful is just over the horizon but always somehow just fails to arrive. Whilst there is an undoubtedly upbeat feel to the record there is no denying that there is a nagging pull of doubt and frustration running through like a thread which taps into the times in which we are living. Outside Looking In tells of the feeling of never quite being part of the apparently good times that everyone else seems to be having and also has cutting remarks about the machinations of the record industry which you sense have come from experience. There is real poignancy on When The Dream Dies which has the added benefit of a great guitar solo, a feature also on show with added piano on Love Don’t Come Easy. Like every good album there are tracks with lighter themes ensuring that you do not get sucked into melancholy.

A special mention should be made of Tom Peters who not only played drums and percussion on the album but also has production and mixing credits. Backed by a top label there is every hope that this terrific record will give Tuchscherer every success – he certainly deserves it.