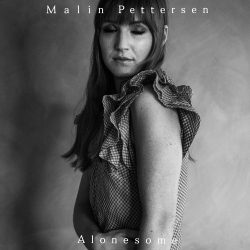 One of the fascinating things about this music genre we call Americana is the increasing amount of very credible recordings we’re getting from musicians living and working outside the USA. We’re seeing artists from countries like the UK, Ireland, Australia, Sweden and others all turning in some very authentic sounding Country and Americana tracks. Latest in this long line of overseas pretenders we have Malin Pettersen, who hails from Norway.

Pettersen is well respected in her home country, having been the main vocalist in leading Norwegian country band Lucky Lips, and a recipient of a Spellemann Award, the Norwegian equivalent of a Grammy. She’s recently been making waves outside her own country – her debut solo album, ‘References Pt 1’, was released in the Spring of 2018 to good critical reception and she has since appeared as a solo artist at Americanafest, where she played a sold out gig at City Winery, along with various other appearances throughout the festival.

It’s easy to hear why Pettersen is making waves on this, her latest release. ‘Alonesome’ is a quite generous EP – six tracks, inspired by a previous visit to Nashville with the band Lucky Lips and showcasing her excellent voice, set against much sparser arrangements than usually associated with her. She does have a very good voice for this type of material and leading single from this mini album, ‘Pause’, is quite beautiful. Backing herself with a simple guitar accompaniment she sings about loss – but the loss of memories and experiences; this is a very moving song about fear of dementia – “Let me hold you in that moment when life pauses. Let it unfold and ring true, let me forget about the losses and let me think that I’m with you”. It is one of the strongest tracks on this release but they’re all good and all share the simple voice and guitar approach which suits these songs so well.
The title track for this release also deserves special mention; ‘Alonesome’ really shows off Pettersen’s singing and is a reflection on a different kind of loneliness – “And what I’m feeling now is something new, it’s combining being alone and without you. I’m alone some.”

There’s a lot to enjoy about this E.P but there’s a caveat as well. After a while there’s a realisation that all these songs are very similar; same tempo, same lightly picked guitar sound, same breathy, yearning vocals – all done very well but all sounding like an extension of the same song rather than six individual ones. Of course, the songs are different but putting them all together in this way doesn’t allow them to stand out. It’s understandable that the artist had some songs she was rightly pleased with, that she felt reflected a change in direction away from the material she’d been doing with her regular band, and wanted to showcase them in this simple style but a whole set of them on the same release is too much.

Malin Pettersen has a new album scheduled for release next year and this has, apparently, been recorded with a band made up of some fine young Nashville talent. It’ll be interesting to see how she rings the changes from this ‘Alonesome’ set; it would be nice to hear some more upbeat material, more variation of tempo and song dynamics.

This is a young artist with a strong voice and a songwriting style that clearly has something to say – but if it all gets said in the same way she runs the risk of being dismissed as a one trick pony and that would be a shame because there is, clearly, a lot of talent here.

1 thought on “Malin Pettersen “Alonesome” (Die With Your Boots On Records, 2019)”