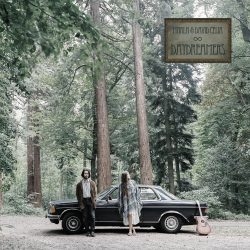 This album sounds so much like it was made sometime in the late sixties/early seventies that there’s a kind of time capsule feel to it; a little glimpse into a forgotten world. You can almost see Marla & David Celia sitting in a coffee shop discussing their latest gigs with Arlo Guthrie while they wait for Joni Mitchell to come and join them!  ‘Daydreamers’ is an album that invokes the Hippy spirit. This is Laurel Canyon folk music dressed up for the 21st century – a sound infused with nostalgia for simpler times. “

Marla and David Celia are now recording together after years of touring and recording solo albums. A firm favourite at festivals and gigs all over Europe as well as in Canada, where David originates from and where the couple are now based, this album reflects their love of travelling as well as their obvious affection for each other.

The first thing to say about the songs on this album is how well the two voices work together. It’s always an absolute pleasure to hear good harmony vocal work and this duo have clearly worked on their harmonies, but their voices also seem to have a natural affinity that makes them blend so seamlessly and produce such a beautiful sound. Sadly their solo voices are nowhere near as impressive, though both their voices are decent enough; there’s just something about the voices combined that is so much greater than the individual components. Marla probably has the more interesting voice of the two, seemingly having more range and texture. Her voice shows particularly well on the track ‘Warming Words’. David’s voice is strong and clear but seems to lack a certain tonal quality as a solo instrument – but when the harmony sound is this strong the individual voices are so much less important.

The album starts particularly strongly with album opener ‘Carry It On’, supposedly inspired by Pete Seeger’s collection of songbooks under the same name. It’s a great track that shows off their voices beautifully as well as boasting some fine guitar work. Lyrically we’re in decidedly hippy country –  “Open your window and breathe in the air/There’s not much to separate you from out there/We are all strangers and family too/Dreaming in circles, under the moon” – but it does give you an early indication of where the album is heading. There are some good songs here – the nicely laid back ‘Heart Like a Dove’, the jaunty ‘Brave New Land’ that’s very reminiscent of The Mavericks with its strong Latin feel and ‘I Am Her Man’ which builds nicely as a track and offers some good slide guitar from David Celia, who really is a very fine player.

The downside of this album is that there’s also a fair sprinkling of rather ordinary, slightly plodding tracks and the whole album soon starts to feel not just folky but decidedly folksy and more than a little twee in places. Lyrics like, “It turns me on to fantasize a life with you/We can make babies, buy a house with a Mountain View” (‘Lover of Mine’) may be sweet but it all gets a bit cloying after a while. Great harmony vocals, great guitar playing, some good songs but the album as a whole is too whimsical and lacking in substance.