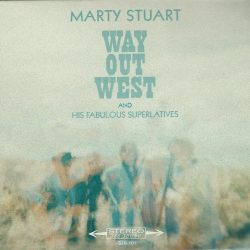 Sometimes it’s good to get outside your comfort zone and listen to something that you wouldn’t normally expect to enjoy. As the late, great George Michael said – “Listen without Prejudice” Most people know Marty Stuart as the guy who used to play guitar for Johnny Cash and as a big part of the Nashville establishment; a very traditional country singer. If that’s your view this album is going to come as a real surprise.  Way Out West is a fascinating piece of record making. There are some traditional sounding tracks on there, songs like Lost on the Desert could’ve come straight from his Johnny Cash days, but there are relatively few of them and even the ones that do sound mainstream have more than a touch of the maverick about them.

The album gets off to an interesting start with opening track Desert Prayer. This is more of a soundscape than a song – there’s some drumming and chanting based on old Lokota Sioux chants along with various guitar loops that creates an atmospheric opening to an album that’s very much about the wild areas of the American west. This is followed up by Mojave, the first of a number of instrumental tracks, spread throughout the album, that sound like they could’ve been recorded by a TexMex Shadows tribute band on mescalin. I predict Quentin Tarrantino will be raiding this album for soundtrack content in the not too distant future. It’s easy to forget that Marty Stuart is a very good guitarist, as is other band member Kenny Vaughan and between them they really let rip on some of these instrumental tracks.

There are so many good tracks on this album but the title track Way Out West really stands out. There’s a psychedelic quality to it that captures a road trip and those long miles through an endless desert landscape. It could’ve come straight off a Calexico album. But this is very much Stuart’s album and the influences you hear are hommage not plagiarism.

Perhaps the key to all this lies with the album’s producer – Mike Campbell is better known as the guitar player that gives Tom Petty and the Heartbreakers their distinctive sound and here he puts his musical know how to good use, drawing great performances out of Stuart and his band and assembling a series of great tracks that surprise and delight in equal measure. He also plays on a couple of tracks but his influence is most obvious on one of the albums rockier numbers Time Don’t Wait – you almost expect it to be Petty’s voice coming out of the speakers as the vocals kick in; for such a clever, creative record to come from a mainstream Nashville musician shows that the country scene can still spring surprises and on a grand scale.

This probably won’t be the best album you hear this year but it will be up there with the very best and it will certainly be one of the more surprising offers from any artist. Listen without prejudice.