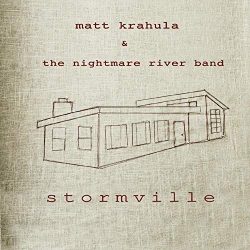 ‘Stormville’ is the third release from New York City’s Matt Krahula & The Nightmare River Band. The three-piece already have a diverse back catalogue, having covered punk on their debut ‘Call The Cops!’, before going a tad more melodic on sophomore record ‘Last Goodbye’. Their latest record follows on in the vein of the latter and settles on an alt-folk style with dashings of Americana. Opener ‘Tonight’ stomps into action, delivering a choral singalong chorus. ‘Arkansas To NYC’ is the first real genuine highlight, gradually building before a grandiose chorus featuring a brass section. The horns remain on ‘Hey Now’ which follows, however, do not give the same effect. Let down by a simplistic melody, it is a poor man’s Lumineers.

Krahula’s vocal is a unique entity. Falling somewhere between R.E.M’s Michael Stipe and They Might Be Giants, it is a differentiate as well as occasionally being a hindrance to the epic sound that the Nightmare River Band strive to achieve. On ‘Burn This City’, the excellent verses lead to a damp squib of a chorus which lacks any real drive.

The record is perhaps surmised on the closing ‘Smoke Settles Down’. Starting promisingly as an intricate acoustic ballad, the band comes crashing in as the track steadily builds, but eventually Krahula’s thin vocal gets overwhelmed amongst the vast production, including a backing choir which drowns him out, and as a result sounds a bit of a mess.