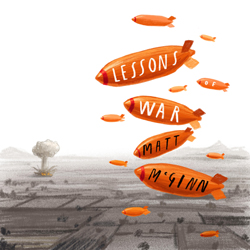 If there were an award given for the most earnest album of the year, then ‘Lessons of War’ by Matt McGinn would be a shoo-in. For his fourth record, the Irish singer-songwriter has collaborated with musicians from war-affected areas around the world on a 10-track collection of protest songs. The project, which took three years to complete, includes guest appearances by London-based Citizens of the World Choir – made up of refugees; Yazan Ibrahim, a flamenco guitarist from The Golan Heights, in south-Western Syria, and Seydu, a percussionist and philanthropist from Sierra Leone.

Unfortunately, considering all the effort he’s put in, things get off to a dull start – ‘Writing On The Wall’ is pedestrian, folky pop-soul. Thankfully, McGinn raises his game on ‘I Was There’, – it’s moody and upbeat, mixes traditional Celtic instrumentation with electric piano and references the Northern Ireland troubles – “I was there in Belfast, religion was the gun. We were all the same but different – I was taig and you were hun.”

The acoustic ‘Bubblegum’ is the best – and most affecting – song here. It’s inspired by the teenage diaries of Bronagh McAtasney, who grew up in Northern Ireland in the ’80s and wrote about everything from hunger strikes to Top of the Pops. The lead vocal is beautifully sung by Ciara O’Neill and there are some deft lyrical touches: “Daddy pinned up Bobby Sands for me, right next to my Madness poster – in our house, in the middle of our street.”

Sadly, some of the other songs just don’t hit the mark – the jazzy shuffle of ‘Refugees’ is pleasant enough, but forgettable, and ‘Lyra’, which was written on the morning of the funeral of journalist Lyra McKee, who was shot while witnessing a riot on the streets of Derry, is a mawkish, middle of the road ballad.

The Citizens of the World Choir give the title track some much-needed oomph, but the simplistic and clichéd lyrics let it down – “If you are the leaders, you push the button, if you are the soldier, do you know what you’re fighting for?”

Writing convincing and powerful songs about the futility of war isn’t easy – just ask Culture Club: “War, war is stupid and people are stupid,” anyone?

Costello and Dylan nailed it, with Shipbuilding and Masters of War, respectively, but there are lots of casualties out there. You’ve got to admire McGinn’s dedication and determination – ‘Lessons of War’ is an ambitious undertaking, but most of it fails to leave a lasting impression.

What makes a good protest song? The answer, my friend, is blowin’ in the wind.