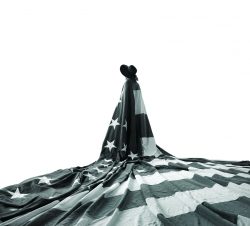 Deep within the rustbelt, May Erlewine has written her 20th release to date bringing another slice of Big Rapids to the international stage. A multi-instrumentalist with soul, the daughter of Allmusic founder Michael Erlewine, and a member of the Earthwork Music Collective, May is all about independent Michigan. The rustbelt is often overlooked as a source of Americana, but with artists like Bob Seeger and Jason Molina drawling and twanging the industrial blues, it certainly deserves more attention.
Her music instantly piques curiosity. No lyrics stand out but half an hour of the overproduced, steady industrial sound had this reviewer looking at pictures of the Big Rapids city website emblazoning the slogan “You’ll Love It Here”, and visiting her local radio station WWBR “100.9 The Big Country”. Spellbinding!

The album has some very talented musicians playing everything from saxophone to Wurlitzer, and even includes outdoor soundscape samples. ‘Second Sight’ is rhythmically slow and the industry of the rustbelt can be heard in the slow whines and empty spaces left between notes. Lyrically vague, but somehow epic, May manages in the time-honoured pop tradition to speak universally, connecting to the everyperson, in a heartfelt yet casual way. While there are no standout tracks, this is still a whole album of songs that were pleasing to both the ear and heart, and full of intrigue about the place that spawned them.