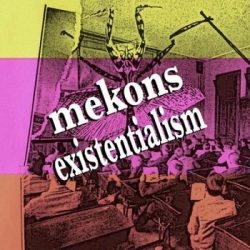 It would be a terrible thing were you to be unfamiliar with The Mekons. Over almost 40 years they’ve recorded more than 20 albums of punky, post-punky and folky music that is at worst okay, generally very good and occasionally excellent (see 1989’s The Mekons Rock ‘n’ Roll, for example). That said, if you are indeed unfamiliar with The Mekons, this is either the best place to start, or the worst. Recorded shortly after composition, these 12 songs were recorded in one take around a single microphone in July 2015 with 75 die-hard Mekons, fans who themselves become part of the process, at the Jalopy Theatre in Brooklyn. Part performance art, part album.

In view of the above, it sounds not unlike a bootleg live recording and given this is the first time these songs were played, the fact there are no slip ups, no false starts, no breakdowns half way through, is testament to The Mekons’ inarguable talents, and even through the scratchy, noisy recording, the songs don’t suffer in the slightest and in fact would likely sound somehow less were they fully realised in a studio. Politically charged and relentlessly, energetically and entertainingly ranty, it’s hard to believe these songs were recorded before Brexit and Trump. Skintrade, Fear and Beer and 1848 Now! are fine examples of what this remarkable band are capable of.

In these frankly surreal times, it’s the freaks, the old time punks and artists of a certain frequency that become the people who are most trustworthy and make the most sense, so it’s good to know there are acts out there making music that is more than just something to simply listen to. A band that thinks about what it does and takes their art seriously, but not themselves; and a question posed here, namely why should an album take longer to record that it does to listen to? is one that most acts would never even have considered. The self-righteous fools.

Art punk’s not dead, it’s very much live and alive.