Following a successful sold out launch of his latest album, ‘Orphans’, at the Green Note the previous evening, Michael McDermott returned to north London and the dimly lit, intimate basement of Finsbury Park’s Aces and Eights on Tuesday to run through a series of audience song requests. ‘Orphans’ is so named because none of its songs found a natural home on previous releases ‘Willow Springs’ and ‘Out From Under’, but they  felt to McDermott like his abandoned children. That’s no slight on the quality of his latest offering – his support for the evening’s performance, Matt Owens, justifiably saying that McDermott is improving with each successive album release.

Although billed as a night of audience requests, McDermott still has a new album to promote and three of the first four songs of the evening came from the new album – the rocky ‘Tell Tale Heart’, which has drawn comparisons to Bruce Springsteen, the balladic ‘Full Moon Goodbye’ and the more wistful sounding ‘Ne’er Do Well’. ‘Folksinger’ was preceded by a highly amusing anecdote of a time when McDermott was fourth on the bill at a Nashville house concert to such luminaries as Larry Weiss, Roger Cook and Peter Yarrow, and which culminated with the latter singing 17 verses of his musical composition ‘Puff the Magic Dragon’ down the phone to McDermott’s wife who was a massive fan of Peter, Paul and Mary. ‘Butterfly’ was another song that comes prefaced by a harrowing story about a girlfriend who, unlike McDermott, didn’t make it out from under and is probably one of the most heartfelt songs of the evening, its bittersweet nature, lyrical beauty and fragile butterfly metaphor not diminishing the unflinching nature of addiction or its consequences. 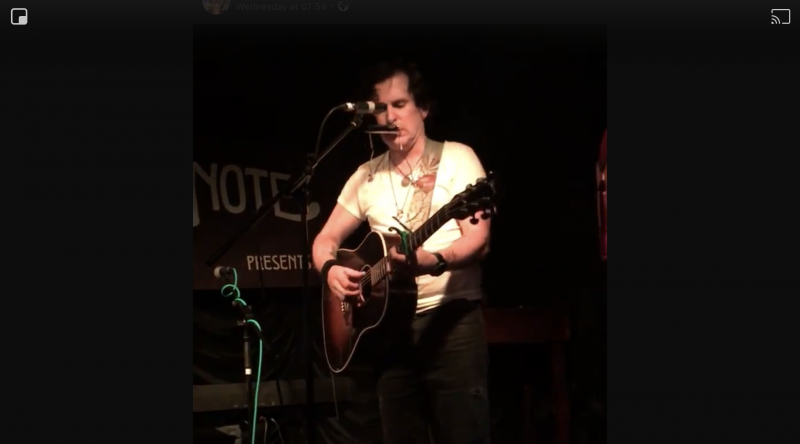 The “orphans” theme has something of a duality of meaning, with McDermott also exploring the peculiar grief of the adult orphan: that sense of rudderlessness of losing both parents which can be one of life’s most significant rites of passage. ‘Ever After’, with McDermott switching to keys, was full of longing and regret at promises he made to his mother on which he feels like he failed to deliver. He had the good sense to separate such a sad song from the tribute to his lost father, ‘Shadow in the Window’, by switching to the more uptempo ‘These Last Few Days’ and the folky ballad, ‘Henry McCarty’, McDermott’s take on the tale of Billy the Kid from one of his two Westies albums.

There were a number of occasions when McDermott reached back into his extensive past to include the likes of ‘Days That Try Your Patience’, ‘620 W Surf’, finishing with his first single, ‘A Wall I Must Climb.’ These are some of so many highlights in what was a perfectly judged set – for which both his fan base and McDermott should take credit. However, it’s probably the song ‘I Know A Place’ that seemed to perfectly capture both where he’s come from and where McDermott’s got to. “Because sometimes you need the darkness / In order to ever see the light / So many miles I have travelled / So many a dim lit bar / Because when things start to unravel / You’re gonna find out who you are.”

Michael McDermott seems more assured of himself and his place in the musical firmament than at any time previously – and with his growing confidence and ever improving song writing perfectly aligning with his inherent talent – his time is surely now.