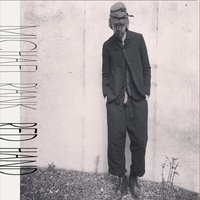 Michael Rank continues ploughing his exceptionally productive furrow which has seen him release six albums in four years. His previous offering, 2015’s ‘Horsehair’ was described by No Depression as “a superb album” while Americana Music Show stated that Rank was “creating some of the most interesting twangy rock and roll today”. This was both with his original rock and roll band, Snatches of Pink, and his solo career which is usually with the band Stag.

For ‘Red Hand’ , Rank has assembled a formidable line-up, most notably including Heather McEntire, lead singer with Mount Moriah. Others on board include John Teer (Chatham County Line), James A. Wallace (Phil Cook Band), Gabriele Pelli (Old Ceremony) and Jeff Crawford of the Dead Tongues. Rank collaborated with McEntire on ‘Horsehair’ and ‘Red Hand’ continues that fruitful union.

It’s something of a contradiction to begin a review of a Michael Rank album by discussing Heather McEntire’s voice, recently seen to such powerful effect on Mount Moriah’s existential consideration, ‘How to Dance’, but it’s unlikely Rank would expect anything different. All songs on the album are recorded as a duet between Rank and McEntire with Ranks low rasping voice almost a whisper at times, against the sweeter and more powerful tones of McEntire.

This creates a distinctive sound that will obviously define the album for listeners. It works well, particularly in tracks such as ‘Jacob’ where the pair sing “we’re just two ghosts living on borrowed time” and the optimistic tone of ‘River Road’ with its “doing aright” outlook. However, it is tempting to wonder how some of the songs may sound with one or the other taking lead vocals along with harmony from their partner.

‘The Ninth House’ is a moving reunion song that also references one of the themes of the album, which is looking back to the songs of the 1970’s. This continues in ‘The Songs We Learned’, a suitably moving closer, where they sing “Is that Heaven calling? Is that what you heard?”

Well-crafted and touching songs with a distinctive vocal approach on which ‘Red Hand’ will ultimately stand or fall for the listener.

A moving collection of duets with Heather McEntire