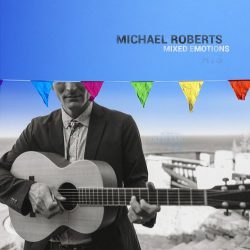 Michael Roberts, leader of alt country band Wooden Dinosaur, steps up into the spotlight for his debut solo album, ‘Mixed Emotions’, a collection of nine songs written by Roberts himself. I’m guessing he simply felt that it was time to start recording under his own name, since his solo output doesn’t sound too far removed from that of the band, which was really a vehicle for him as a singer/songwriter anyway.
This solo effort does have a slightly less frantic feel about it – more pastoral in its style and more relaxed in the delivery. Hailing from Vermont, Roberts has been fronting Wooden Dinosaur for some years and has released ten albums with the band, so it would seem that he has decided to re-focus his work, with a very slight change of direction, moving more towards narrative driven songs that are a bit less “alt” and a bit more country.

It’s a decent collection of songs that leave you in little doubt what they’re about – ‘Jobs and Pontiacs’, ‘Brand New Ford’, – there’s even a ‘Jolene’ in there, though it’s not Dolly’s one. As a country influenced album it does seem a bit formulaic. There’s the pedal steel drenched not quite rock of ‘Saturday Night at The Rialto’, the banjo plucked homesteading song ‘The Hawk and The Grouse’, the laid back, brushes on the snare drum love song, ‘New Love’ – it all feels a little predictable. The songs are ok; well written and nicely sung but it’s not an album that particularly excites.

The more you delve into Roberts’ career the more odd this album seems. In addition to alt country outfit Wooden Dinosaur he also fronts country covers band, The Rear Defrosters (great name!) and, again, their music isn’t hugely removed, at least in style, from what he’s doing on this solo album. Obviously he feels it’s time to record under his own name but without a significant shift in style it seems like a strange decision. Perhaps he just felt the time was right to put his own name out there and it is an assured “debut”- but you’d expect that, given the amount of albums he’s already been involved in. This is a competent album from a seasoned singer and writer, well performed and very listenable – but it lacks anything that elevates it above the crowd.

Debut album from established singer/songwriter that struggles to distinguish itself