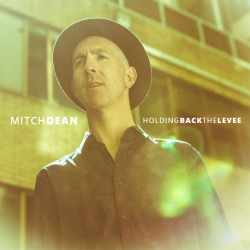 Hailing from Melbourne, Australia, Mitch Dean is no spring chicken. Perhaps more of a gnarled rooster. And, as we all know, gnarled roosters make much better records than any spring chickens ever will. Dean’s voice is quite light and tuneful, more than a hint of Petty in there, and his songs are lyrically well focussed (if maybe a little twee in places). The overall sound is organic and quite pleasing, if maybe too mainstream for some tastes.

‘Broken Wing’ has more than a hint of happy-sad Petty, perhaps without the searing heights, but it’s one of the better tracks on this record. ‘Let it Fall’ plots a similar Petty ‘lite’ path – it doesn’t quite take flight despite a solid attempt to do so. ‘The Only Two’ is probably the best of these ‘Mitch does Tom’ songs. ‘In The Stream’ is a rockabilly-meets-harmonica blues boogie. The ’stream’ in question being the replacement of physical, vinyl records and live music with digital streamed content, much to Dean’s chagrin. It’s quite different to many of the songs on offer, and the better for it.

Closing track ‘Far Above My Head’ builds into a space more interesting – starting with some outback meets aborigine percussion, a hypnotically slow pulse, and rising up into a George Harrison-esque chorus. It’s probably the best, certainly the most esoteric track on the record. ‘Holding Back the Levee’ is in no way a bad album, far from it. On the whole it’s very gentle on the ear. Unfortunately it just doesn’t quite deliver, other than in a few fleeting places, a whole greater than the sum of its parts.

Antipodean Petty-esque guitar rock. By no means bad, but not remarkable.