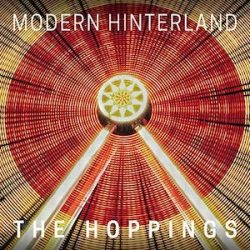 This is  Modern Hinterland’s first album. It is built around Chris Hornsby, who produced the record, wrote all the songs, and who sings and plays guitar. He is accompanied here by Tim Thackray on bass and Colin Marshall on drums. Try to listen to Hornsby’s single, ‘Helium’ which is taken from his first album. It is a taster for ‘The Hoppings.’

A good harmonica starter for ‘Jemima’ (the first track) is followed by a song of memories, young love, longing and mystery. Chris’ voice immediately captures the listener with knowing details like: “Looser hair than all the rest/ So I like you the best/ Like a cousin or a sister.” This delicate choice of words continues through the collection. But here, there is the implied mystery as well: “Oh Jemima/ What did they do to ya?” with the appeal of an incomplete story.

The second track, ‘Inevitable’ is another song of growing up, where Chris demonstrates his skill in songwriting, with for instance the use of couplets, reference to singers at the time, on the jukebox, and that detail that makes taut one’s recognition and response to a real moment, remembering what it was really like: “But standing there with you, as you breathed in and out/ I think it was the first time, I’d known a lack of doubt.” Outstanding, particularly with Chris’ voice and culminating in the captured and disastrous moment.

The track that gives its name to the album’s title, ‘Take You to the Hoppings (To Do Wrong)’ centres on the huge fair at Town Moor, Newcastle. A whistling start! Chris has accepted, as part of his songwriting process, that  he often hums or whistles melodic parts of songs he’s working on. It certainly works here. Again, here we have the briefest glimpse of young love and its surging temptations, “the sweetest of sins” coupled with the desire “to do wrong do wrong, do wrong.”

Hornsby takes the listener into his confidence and provides the perfect jump into the remainder of the collection, where he embarks further into the hinterland, the land behind his own world. He is from the Newcastle area originally, but has a feeling for that in-between place. This is perfectly described in the next song where he describes how he fell in love with “The Girl Just South of Hackney,” an area of London which could be described as a hinterland originally and increasingly intertwined with the more urban City of London. Thus in the song there is the particular reference to a walk “From Coate Street to the towpath,” and how the girl he knew at the time, “played in a band where she only moved her hands.” A remembered moment. And the sadness of the description, that despite his love, never led to his finding his way back to that girl. Never mind – recounting that episode has provided a memorable piece of music, a standout track on the album. You never know, that song might come to be sung somewhere in that hinterland?

In ‘Lowland Daughter’ there is harmonica again and another girl, and reference to Abbey Strand, a particular place in Edinburgh, and standing “On the slick stone water.” ‘A Fine Mess’  continues the feeling of culpability and vulnerability., coupled with personal insights such as: “Don’t be fooled by this idiot grin”

There is plenty to note in ‘I Know Everybody That Lives Around Here.’ Notice the snapshots: “Two gruff dogs by the fireside.” And the use of the banjo in the background. Knowing everyone in an area “I see ‘em in the streets and I see ‘em in the fields” is a reference to life in the hinterlands, and with its detail, draws the album together: “gabble corner and the domino set,” “sipping soda with lime,” “Jim with his limp again” “Local cricketers all ready for the match/ Warming up on a fermented patch.”

‘Begging For Your Help’ is a simple statement of love, remarkable for its use of rhyme, moving for the way it underlines the true meaning of the song’s title, and always lurking, surely, is that self doubt. And the last track takes us back to the North. ‘York’ ends the collection perfectly, with the desire to return to “Castle Museum,” and “That sweet shop, down the twisted listing lane, with the ill-judged fudge sign.”