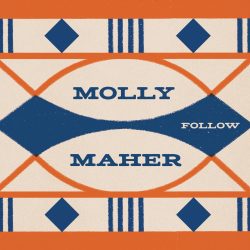 Waiting nine years to produce an album that “feels good”, even scrapping an album along the way because “it didn’t feel authentic”, may seem a little extreme to some, to say the least. But this is exactly what Minnesota artist Molly Maher did – and thank goodness she did – finally producing ‘Follow’, her fourth album overall, a collection of excellent Americana roots, and all hugely enjoyable.

Maher spent six weeks or so travelling through Mexico last winter with her husband and the road trip has clearly inspired the overall flavour of the album. There is more than just a hint of Calexico (although without the horns) and Los Lobos here, she invited Mexican singers to participate on tracks on the album and even wrote a few songs using a jarana, an eight-string Mexican instrument. The first of these songs, ‘Django’, opens the album, all guitar, organ and Latin rhythm, an instrumental track that could play across the opening credits of any spaghetti western ever made. ‘Run Run Run’ is reminiscent of something Tom Petty would have done, if fronted by Sheryl Crow, the video for which was reviewed in these very pages recently. ‘Pale Face River’ is a strong but understated country-folk number, and ‘Open Road’ is one of the standout tracks, with a curious fade-in opening, almost danceable (in the way that bands like Fun Lovin Criminals were), picking guitar with a repeated refrain driving things along.

There is a hint of borderline experimental on some of the songs, which, mixed with traditional roots helps to create a fascinating whole. ‘Storm Cloud’ is a good example….a blues/folk/electronica amalgamation, great guitars and a striking background vocal harmony.  More of that Mexican influence follows; ‘Bird Song (I’ll Follow You)’ has more than a hint of the Ry Cooders about the guitars and the lead on ‘Go Slow’ nods gently towards Carlos Santana, perhaps in a less manic way than the man himself. ‘Someday Somebody’ sits beautifully in the twangy guitar Americana class and then penultimate track ‘On The 18’ drifts back towards the experimental side of the album, almost jazzy, with double bass, guitar and organ holding a very laid back vibe, ambling to a 6 minute 30 second finish. Final track ‘Find The Shepard’ was inspired by a road Maher drives sometimes near the Mississippi River, and consequently features meandering guitars coupled with an interesting vocal production. Maher says it is her favourite song she has written, which must have been a tough decision.

There is hardly a foot placed wrong on this album. Great melodic songs, a mix of styles all well-executed, high-quality musicianship and excellent production. A joy from beginning to end.