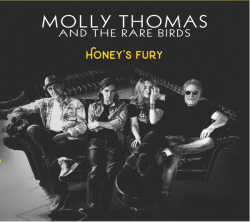 ‘Honey’s Fury’ is the debut album from the Alabama based Molly Thomas & The Rare Birds. Molly is best known for her violin work on other singers’ albums such as Todd Snider, Will Hoge and Matthew Ryan, but for this album she’s teamed up with The Rare Birds who consist of Rick Hirsch (guitar), John Milham (drums) and John Keular (bass).

The twelve songs that make up the album are on the whole mainly ballads or mid-tempo songs which leave ‘Honey’s Fury’ needing some light and shade which it doesn’t get until the last track ‘The Ocean’ with its up-tempo hand-clapping Bo Diddley beat, but by then it’s a bit late to add that much needed variety of pace to the album.

There’s a bit of Lucinda Williams in Thomas’s vocals although on sections of ‘Laura’ she sounds like the female harmonies of the Mamas & the Papas.  As well as Thomas sings, on one or two of the tracks her voice is too low in the mix which is a shame as she has an excellent, gritty voice that blends well with the instrumentation of The Rare Birds.

The stand-out track is the deeply heartfelt ‘Sharona’, a song Thomas wrote about a girl she met who was fleeing New Orleans after Hurricane Katrina. It also features Thomas on violin which adds another texture to the song. For someone renowned for her violin playing, it would have been nice to have heard the instrument on one or two more tracks as it would have added another layer to the album’s sound palette.

The main problem with the album is the somewhat dirge-like quality of some of the tracks which means that it’s an album you probably won’t want to revisit too often which is a shame as tracks such as ‘Sharona’ and ‘The Ocean’ show what might have been with a bit more variation of tempo across the twelve tracks. It’s the kind of music the diners in Edward Hopper’s most famous painting “Nighthawks” look like they might be listening to as they stare into the middle-distance.