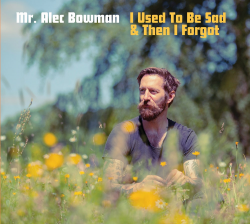 Mr Alec Bowman offers the ears of the world a serving of erudite, melancholy folk. Bowman is something of an English Leonard Cohen, which is a high compliment, and one his doleful baritone is quite deserving of. Indeed his simple song structures, short epithets and simply plucked/strummed guitar across these songs are distinctly Cohen-esque. Equally so is the dark, dark humour nestling in the lyrics.

Formerly of ambient dub outfit Formication, there’s a hint to his past in some of the soundscapes Bowman employs, mostly floating behind, sometimes smashing into the boughs of the songs. It’s a dark listen, as you might expect given the style and influences on display. However, there’s many a charm to be had within the bleakest of song, and Bowman’s adds a dash of self-deprecating humour, perhaps even fragile optimism to it all.

Opener ‘Physics and Form’ starts with pump organ and opines about life crashing down as a plummeting aircraft might. It’s the closest Bowman has to a poppy, singalong track (though that might be stretching the notion of poppy and singalong somewhat). Closely following is ‘A Ditch Worth Dying For’, which is Bowman it his bleakest, with mechanical saw-screeching sounds puncturing the track. The starkness is painfully evident again in ‘Long Goodbyes’, but there’s a genuine ‘Intermission’ track at the midpoint of these eleven songs. ‘Hand In Heart is simple and soaked with black humour – a comprehensive list of ways Bowman wishes not to die..

In simple terms, Bowman has delivered a fine, fine album. His association with Josieanne Clark (credited with production and backing vocal duties) is a further stamp of quality, not that it’s necessary.

Bleak and personal, yet charming and humorous. Shades of Leonard Cohen with a contemporary English vibe.