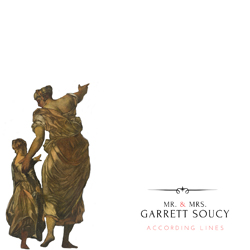 US husband-and-wife folk duo Mr. and Mrs. Garrett Soucy (Garrett and Sirri) describe themselves as ‘singing rescue boat lyrics, pulling souls from the wreckage of meta-modern let down.’ Heavy stuff, eh? They live in rural Maine, with their nine children, so you can imagine there’s a lot of wreckage to deal with – just keeping the house tidy must be hard enough, let alone finding the time to record ‘According Lines’, which is an album of self-penned, religious-themed songs, as well as obscure hymns.

Singer-songwriter Garrett’s other projects include Christian folk-rock outfit Tree by Leaf – they have spent years playing ‘honest to God local music’ around the Northeast of America – and duo Sunlight In Architecture. He’s also a preacher – the pastor of Christ the King Church, in Belfast, Maine. ‘According Lines’ is lo-fi, stripped-down and intimate – just vocals and acoustic guitar. On the hushed ‘My Lord, I Did Not Choose You’, which is based on a hymn from 1836 and is sung by both Garrett and Sirri, you can hear every creak of the recording. It’s as if you’re in a church or chapel, listening to it being performed.

There are some nice moments, particularly when the duo share vocals, rather than when Garrett sings on his own, but like a lengthy sermon, the album isn’t easy to sit through. There’s just not enough going on to keep things interesting – shuffling, minimalist folk is the order of the day, and the preachy tone and the recurring religious themes and imagery soon become wearing. ‘When I Am With Him’  is a welcome, bluesy, upbeat strummer, while ‘Satan’s Jewel Crown’ warns of the dangers of living a life that’s: “so sinful and evil. Drinking and running around. All the things that I did for the love of the devil. I knew my reward was Satan’s jewel crown.”

On ‘Photosynthesis’, Garrett sings: “If you remain in the light, you will never leave my side. If you hunger after righteousness, you will be satisfied.” It may not be the done thing, but ‘According Lines’ would be a much more satisfying record if it went to the dark side a little more often.