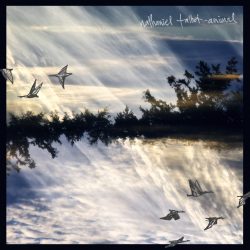 athaniel Talbot’s fifth album ‘Animal’ takes a new direction from his previous recordings. Whereas they were dominated by acoustic fingerpicking and fiddle, ‘Animal’ adds an electric edge. Talbot works in the Americana genre; this is roots music that encompasses spirituality (“I’m a man, a man of god, a god-loving man, show me where answers lie lord, take me by the hand shed a light”) and charts a disaffection with American politics (“Another man up in the pulpit, in the statehouse, head of a table. Got a fat pen, scratching egos, talking too loud’).

Unifying these are a feeling for the land; nature is the reference point and analogy across this collection of ten songs from a gifted story-teller sung with an elegant and graceful voice. ‘Animal’ invites us to know the singer is “howling at an empty wind” while the “snakes in the yard will rise up and strike anyday”; we have “unkempt gardens” (‘Man of God’), and are warned that “a good seed in poor ground won’t grow” (‘Shadow Songs’ )while ‘Wilson’s Wharbler’ is a song so thickly woven with imagery that you can feel the cool of the woods and smell the pine needles, until, yes, like the subject of the song you yearn to fly with the songbirds.

Its little wonder that nature figures so often; as well as recording music Talbot works 60 hours a week on his organic farm near Puget Sound in Washington State. The wonder is that he actually has the time to write songs. These are songs dug from the same soil Talbot works. Not that Talbot relies on well-trodden paths when it comes to songwriting. His subject might be perfect for the roots music oeuvre but he is anything but formulaic. ‘Animal’ moves from simple acoustic folk, through folk-rock, taking in soulful funkiness and even bluesy jazz.

Talbot references Elliott Smith and Kelly Joe Phelps as inspirations for his songwriting and that is evident in his writing. But he has his own knack of allowing his tunes to take a surprising turn; fluid playing suddenly jags, catching the listener’s ear and urging attention. Backed by bass (Sam Howard), keys (Galen Clark) and drums (Chris Johnedis) the songs have a natural, live feel topped by Talbot’s beautiful voice. Often reminiscent of an urgent James Taylor it impels the tunes forward. Having a voice that recalls such a fine singer is lucky enough, but Talbot’s works equally happily in Tayloresque folk/rock as well as the songs that ramp up the funk – ‘Intuition’ brings the surf-rock groove of Donavon Frankenreiter to the party, ‘Mind Made Up’ does the same but more J.J Cale sounding, while ‘High Ground’ is ‘Boat to Bolivia’ era Martin Stephenson. And yet the album never feels eclectic; it mines divergent inspirations but retains the pastoral roots harmony which is testament to the effort Talbot has expended cultivating his craft. And, it should be mentioned that all this is packaged behind a quite beautiful cover; there is a breeze blowing across the Sound, turn up your collar, watch the geese take flight and enjoy the fruits of Nathaniel Talbot’s labour.

Songwriter, possessor of a beautiful voice and an organic farmer to boot, Nathaniel Talbot delivers a ripe harvest of fine tunes.