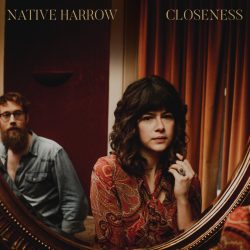 With ‘Closeness’ their fourth album, Native Harrow have not just confirmed the immense promise of 2019’s ‘Happier Now’, they have expanded and diversified their sound to create a work of immense and enduring quality. Moreover, the Pennsylvania duo of Devin Tuel and Steven Harms have retained all the elements that made ‘Happier Now’ such a satisfying listen – that gentle west coast folk sound and Tuel’s enchanting voice, which sounds even better here, and have introduced new elements that make this a rather more eclectic collection.

The opening fuzzy guitar notes on ‘Close’ at once signal a different approach. The electric pop of the opener being only the first of a number of songs that depart from the earlier template. ‘Same Every Time’ has a mellow funky-jazz backdrop to which Tuel adds her expressive vocal to produce one of many highlights on the album. ‘Carry On’ starts with swirling organ and open ups into a gospel-soul treasure where Tuel’s voice is again the star of the show as she demonstrates its remarkable tone and versatility. The song is followed by the gentle funk of ‘If I Could’ and the easy-paced jazzy ballad ‘Turn, Turn’. However, the more familiar Canyon sound is also present in the dreamy folk-pop of ‘The Dying of Ages’ and the soft-rock (in a nice way!) of ‘Smoke Burns’, whilst ‘Even Peace’ is straight country-rock, elevated once again by the sheer beauty of Tuel’s voice.

Reservations only creep in with the last two tracks, ‘Feeling Blue’ is a slightly laboured piano ballad whilst the album concludes with ‘Sun Queen’ a nearly six-minute-long orchestrated finale that never really takes off. Rather than embellish the duo’s sound, it somewhat smothers it. Neither are bad songs though and any form of experimentation will throw up the odd glitch. Overall ‘Closeness’ is a highly impressive album. With it, Native Harrow have successfully straddled a line between on one hand maintaining a recognisable consistency to their sound, whilst simultaneously developing and evolving their music.