Sadly in the end there were none – all the hopes americana festival-goers had for a late summer blow out were dashed by news earlier this month that Red Rooster wouldn’t in fact be going ahead as planned with social distancing, but the organisers have announced another virtual version of it (they previously did something in May) which will take place from 4th-6th September. END_OF_DOCUMENT_TOKEN_TO_BE_REPLACED

Native Harrow have just announced that their new album, ‘Closeness’, will be released on 4th September.  While you wait, check out this single from the album. ‘Shake’ is a foot-tapping, rhythmic, catchy song. In the video, which was made by the band during quarantine, Devin Tuel is waiting for dinner guests who never arrive. It’s an exploration of loneliness, anxiety and the absence of those who should be close to us.  A timely song and an absorbing glimpse of the new record.

Remember those January nights drifting from one venue to another crammed venue? Glorious Hackney alive with music and good feelings.  Seems like another world now, but it was really only a few short months ago.  Of course we gave a lot of attention to the most public part of the Americana Music Association UK’s conference, but there was just so much going on that we couldn’t cover it all.  Now, though, with those same venues – like all the others across the land – closed up for the duration it’s nice to take the time to look back again. And to remember that hopefully this will soon all be possible again. Music – live as it is meant to be. END_OF_DOCUMENT_TOKEN_TO_BE_REPLACED

Fast becoming pretty much an essential date in any Americana fan’s festival diary these days, the Static Roots Festival in Oberhausen, Germany this coming July announced its first performers just before Christmas. Dietmar Leibecke, festival organiser and promoter, appears to have got his line up pretty spot on so far, with two of the acts announced both in the running for UK Album of the Year at the AMA-UK awards later this month – Pete Gow for ‘Here There’s No Sirens’ and William the Conqueror for ‘Bleeding On The Soundtrack’. END_OF_DOCUMENT_TOKEN_TO_BE_REPLACED

Frankie Lee isn’t your average Americana singer-songwriter: his latest job involved the herding of 20 sheep on a small farm in Afton. For the recording of his latest album he retreated to his hometown of Stillwater and found that the house he grew up in was still available. In a backwoods setting and resembling a log cabin, he converted the property, Bon Iver style, into a recording studio, gathering fellow musicians to record the eponymously titled record over a mere three days. END_OF_DOCUMENT_TOKEN_TO_BE_REPLACED

Deep into inner city Bristol, flanking the famous Bearpit, sits The Golden Lion pub. The Lion prides itself on its musical heritage – framed photos of Elvis adorn the walls, alongside previous performers and patrons of this americana flavoured establishment. On entry, visitors are confronted by an imposing bar, complete with longhorns and lonestars. Having established that, Devon Tuel and Stephen Harms, here on in to be known by their performing moniker ‘Native Harrow’, were deep in discussion with the evening’s sound engineer, a charming gentleman borrowed for the evening from the nearby Mother’s Ruin venue. Pale ales  were purchased and introductions made. END_OF_DOCUMENT_TOKEN_TO_BE_REPLACED

Pennsylvania duo Native Harrow have announced UK tour dates in support of the release of their new album ‘Happier Now’ due out on 2nd August. The month-long tour will include a slot at The Long Road festival, in-store performances at Rough Trade shops in London, Bristol and Nottingham, plus Jumbo Records in Leeds. END_OF_DOCUMENT_TOKEN_TO_BE_REPLACED 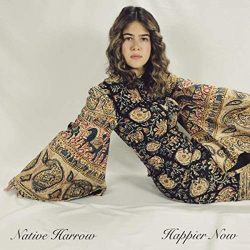 Let’s get straight to the point.  This is a captivating, almost mesmeric album of the highest quality.  That last sentence alone will tell you what is to come during the rest of this review but let’s take the opportunity to fill in some of the blanks for those who maybe aren’t familiar with Native Harrow. ‘Happier Now’ is the third album from singer-songwriter Devin Tuel released under the nom de plume Native Harrow. END_OF_DOCUMENT_TOKEN_TO_BE_REPLACED