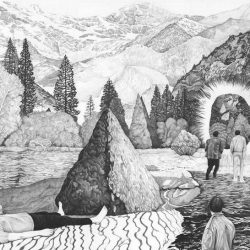 On first listening to this album it sounded like a collection of songs where you wait a long time for something to happen and not a lot does. But this is an album that rewards repeated listening because it really sneaks up on you and suddenly you find it’s very interesting indeed, with some good songs well delivered. Essentially it’s a singer/songwriter album drawing heavily on the folk tradition of the 1960s – often reminiscent of the excellent Incredible String Band but there are also elements of Roy Harper and early Donovan and even some material that sounds like some of Syd Barrett’s solo work.

It would be fair to describe it as a strange album – and there are still long periods where nothing much seems to happen – but it is most definitely interesting and well worth taking the time to hear.

Ned Collette hails from Melbourne, Australia but is now based in Berlin and you can hear some of that European influence on many of his songs; they have the feel of an old and established environment about them and the suggestion that they arise from an urban setting rather than a rural one. This is, effectively, folk music for the 21st century but infused with the psychaedelic folk influence of the late 1960s.

Collette has assembled a fine bunch of musicians around him for this album and is joined by fellow Australians Joe Talia (who also co- produced the album with Collette) and Ben Bourke, plus Alexander Garsden, cellist Anthea Caddy, and piano from The Necks’ Chris Abrahams on the album’s centrepiece, ‘June’. Collette and his collaborators do produce some quite epic pieces on this album, with the aforementioned ‘June’ clocking in at a mighty eleven minutes and ten seconds. At the other end of the scale the album’s shortest track, ‘No Wonder You Look So Forlorn,’ is an instrumental that lasts just one minute and fifty one seconds – but is no less epic for its brevity.

It’s no real surprise to discover that Collette holds an honours degree in improvised music and composition and that he helped to found one of the longest running weekly forums for experimental music in the world, Melbourne’s Make It Up Club. The spirit of improvisation and creativity run rampant through this album and it’s well worth checking out.

Given that this is, effectively, a double album, coming in at just shy of seventy minutes, you get a lot of music for your money but there’s not a lot of variation in tempo or key so some tracks do seem to run into each other – and this may well be intentional. It certainly feels that way and it’s clear that a lot of thought has gone into the structuring of this album. ‘Old Chestnut’ is an album full of weird and wonderful ideas, the majority of which work very well – but it falls very much into the realms of experimental music and psych folk and, as such, is unlikely to have wide appeal. Presumably Ned Collette knows his audience and this will surely be well received by those who already appreciate his music but its density and persistent slow tempo is unlikely to win many new converts; and that’s a shame because it’s an album that rewards perseverance.