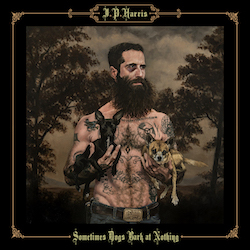 For this, his third full-length album, JP Harris has enlisted the production skills of Morgan Jahnig (Old Crow Medicine Show) to help capture some of his life stories. JP’s had a rootless existence, with a background resembling that of a latter-day hobo. But what of the music? The album’s songs can best be classed as country tales for the workingman. Harris has spoken passionately about the blue-collar nature of his genre and themes of love, loss and hardship proliferate. While such topics are ubiquitous in mainstream country, they are rarely presented in a style as believable as that evident herein. The artist – it should be noted – still works a regular job as a Nashville carpenter, which perhaps serves to explain the undeniable authenticity he brings to this selection; at times his vocal timbre has echoes of Joe Ely and John Prine.

Opener, ‘JP’s Florida Blues #1,’ is a Hammond-driven rocker that blows in like a hurricane, replete with Lowell George-esque slide. Mentions of “reds, blues, uppers and downers” make this a clear paean to highway-living, while the chorus’ gospel harmonies lend it a memorable resonance. The album concludes in similarly high-octane style with the frantic live feel of closer ‘Jimmy’s Dead and Gone.’ Visions of “boxcars” abound, while the line “I received my education on the freight trains of our nation” acts both as an indicator of a philosophy borne of real-life road experience and a nod to Willy Nelson. Sandwiched between these up-tempo tracks, however, is a very varied body of work. The rollicking country-feel of ‘When I Quit Drinking’ has a bittersweet humour – its barroom vibe softened by warm violin. Meanwhile, the world-weary title track ponders some of life’s more curious questions over a dobro-driven, finger-picked rhythm. Harris sings, “Sometimes a girl’s heart gets busted, by a guy she once trusted. Ain’t no reason, ‘cept that he was born a man.” Other standout tracks include the melancholy ‘Lady in the Spotlight,’ with its flat-picked Tex-Mex guitar and the stripped ‘Runaway,’ an ode to wanderlust where Harris states that he “…never had the heart to stay and do right by my wrongs.”

In this era of music streaming, the album as an art form has undeniably suffered – its importance has been eroded as focus has shifted to the instant gratification of standalone tracks. It is refreshing, therefore, to encounter a release which constitutes a complete work – an album that ebbs and flows and allows the listener to live and breathe the hard travelling and heartbreak of its songs.