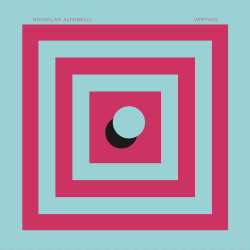 “My name Nicholas. I write sad songs”. It’s an honest salutation written by the man himself on his Bandcamp page. And if first impressions stick, it seems to be the light in which Altobelli feels comfortable being illuminated; read past interviews and a certain self-deprecating melancholy figures almost as much as people conversant with his music throw in Woody Guthrie as a comparison and reference point.

‘Vertigo’ follows Altobelli’s first album output for four years after ‘Searching Through That Minor Key’ (2015), the 2014 EP ‘Mesocyclone’ and ‘Without a Home’ (2013). For sure, some of the songs on ‘Vertigo’ are a touch wistful, but what artist doesn’t pull the pensive rabbit out of the blue hat from time to time? Nicholas has trodden a not over unfamiliar path (sorry for the tortuous double negative but I’m looking to evoke the complications that give rise to inspiration here!). The recording of ‘Searching Through That Minor Key’ and ‘Mesocyclone’ were woven around a divorce (is there a richer source for musical greatness than relationship trauma? If ‘Blood On The Tracks’ counts as empirical evidence then the answer must be no) which interrupted recording.

In fact, ‘Vertigo’ is a collection of songs sheltering many that did not find a place on previous albums (Homeless in fact. Not even a space for them on ‘Without a Home’). That is not to say this album feels like a bundling together of leftovers – absolutely far from it. This is a complete album and, if it might, at times, be lit by an exploration of fragility, it equally raises hopeful eyes too. After telling us “I just can’t run anymore” we are urged to “Go on look out the window, it’s not so bad”  (‘Look Out The Window’). ‘Don’t Let the World Get You Down’,  on the other hand explores what we mean by (and how we measure) success. There is sunshine after the rain.

Altobelli double-tracked his musical career with training to be a school teacher – a profession that demands a certain amount of understanding, empathy and observational ability. Interesting classes no doubt – ‘Sir what did you do at the weekend’ ….‘I recorded some lovely songs’. Whether the youth of today is going to add this his album to their playlist I don’t know, but they would be rewarded if they did. The whole album oozes class and some of the guitar playing (‘Runaway Trains’, ‘Thuderstorms’) is exceptional; soaring, visceral and with a beautiful, beautiful tone you will rarely find bettered.  The opening track ‘Red, White and Blues’ explores a James Tayloresque mix and mash of stories and allegories. Like many songwriters at the moment Altobelli projects his art against a concern for the troubled turn politics is taking globally. The title might seem obvious but the song is presented, as Altobelli says, as a love song to America (and, he says, cocooned in an obsession with Lady Gaga’s ‘Come To Mama’). It is a strong opener followed by a collection of strong songs. The folk, country, rock flavour is girded by a sharp sense of melody and Nicholas’ voice is often reminiscent of Josh Rouse.

‘Vertigo’ is an album by an artist with charm and humility. It’s an album to cherish, nurture, care for and grow with. And, the great thing is, if Nicholas Altobelli is new to you, there is a back catalogue to explore too!

Beautiful record from artist with his feet firmly on the ground