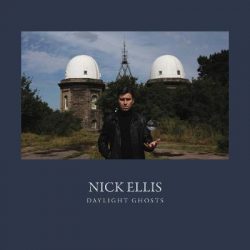 Throughout this record Ellis’ guitar playing is excellent and the sound is clear and resonant (it was recorded in Liverpool St George’s Hall Crown Court Room) and it’s clear the further that Ellis gets from standard acoustic singer-songwriter fare, the better he sounds. The opener The Grand Illusion survives only on its guitar playing and the following Hanging Around with its poppier melody weaves a far more interesting pattern. Ellis has the voice for rock and the fingers to play pretty much whatever he pleases; the beautiful cascading phrases of Carillon are brought back to earth by the vocal. Where the pieces are unencumbered by the vocals they really stretch out as Dance of the Cat and Good Morning Mr Hirons show.

When the electric guitar comes out for In the Park, the atmosphere changes and though it’s only a basic chug, all at once the voice and the instrument find some sympathetic symbiosis, the flatter tone of the guitar and the greater urgency in the voice making for firm friends. I’m pretty sure that if Ellis had recorded a record full of instrumentals I’d be full of gushing praise: his tone really is lovely, he caresses the strings so that they sing with a tenderness that his voice can’t manage. Raise the Arc is full of soft percussive notes that float from his guitar like a cloud of butterflies taking flight.