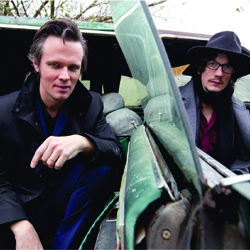 Those sons of the infamous Southern behemoth that was James Dickinson, North Mississippi Allstars have announced several UK dates in support of their latest album, Prayer For Peace. Founded in 1996 by brothers Luther (guitar and vocals) and Cody Dickinson (drums, piano, synth bass, programming and vocals), the Allstars have forged a reputation for combining true Southern grit with elements of soul, blues and even hip hop.

Prayer for Peace was recorded at Memphis’ famed Royal Studios with Boo Mitchell (son of Willie Mitchell) producing and as Cody says, “In the process (of recording) we were able to tap into what makes North Mississippi Allstars tick. What we do is, we look to the past with reverence and respect but we fearlessly forge ahead into the future. We’re deeply steeped in American roots music but we are very much a modern band. We are at our best when we’re exploring both at the same time.”

Released by Sony Legacy, Prayer For Peace sees the Allstars putting their stamp on classic blues numbers and folk traditionals, including Mississippi Fred McDowell’s “61 Highway”, “You Got To Move,” and R.L. Burnside’s “Long Haired Doney” all paying homage to the country blues legacy. The title song is a celebration of multiculturalism, inclusion, and compassion although as Luther says, “We’re not a political band. One thing R.L. Burnside taught us was that you can play the saddest song in the world, but if you do it with a smile on your face, you can make a whole roomful of people dance. That’s what this record is about. Making people dance. Making them want to rub up against each other.”