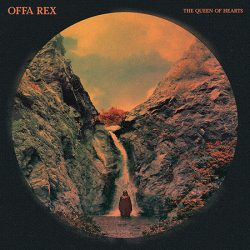 This is a really fascinating album. A collaboration between classic English Folk Singer and instrumentalist, Olivia Chaney and American Indie Rockers, The Decemberists, this is a recording filled with fine musicianship and vocal work that seems to celebrate the heyday of British Folk/Rock – if you think back to the early recordings of Steeleye Span, Sandy Denny era Fairport Convention and the likes of The Albion Band, you’ll have a good idea of what to expect from Offa Rex.

What is particularly impressive about this album is the sheer ability of the musicians at work here. The Decemberists have always been known for their musicianship and the fact that many of the band are multi instrumentalists but Olivia Chaney is no slouch in this area either, in addition to her fine vocals she makes contributions to a number of the tracks on electric harpsichord, acoustic guitar and harmonium. And “The Queen of Hearts” is not just a case of The Decemberists backing Chaney – it’s a proper collaboration, with Colin Meloy lending his fine tenor voice to lead vocal duties on a couple of the tracks.

This is an album to be savoured. The band clearly know their traditional folk music and the majority of the tracks are traditional numbers that various members of the band have arranged for the album – but even their arrangements have been influenced by such stalwarts of the Folk world as Martin Carthy, Anne Briggs, June Tabor – this album is proud to wear its influences and inspirations on its collective sleeves.

The album kicks off with the title track, The Queen of Hearts, as recorded by Martin Carthy on his own debut album and you can clearly hear his influence in this arrangement – but with Olivia Chaney’s electric harpsichord playing to the fore the band really claim it as their own. It’s this approach that you hear again and again across the album – the acknowledgement of the influences but then the desire to inhabit the track in their own way. This is particularly true of the second track, Blackleg Miner. For those of us who spent our youth hanging around folk clubs, we’ll have heard this Northumbrian tale of strike breaking many, many times – but Offa Rex give it new life with a great arrangement that sees Colin Meloy take the lead and spit out the lyrics with real spite.

The quality just keeps coming. The Gardener sees Olivia Chaney put her own stamp on a traditional track that has been forever associated with Maddy Prior, then we get an equally impressive take on Ewan MacColl’s iconic The First Time Ever I Saw Your Face. We even have that staple of the classic folk/rock album, the instrumental medley. Constant Billy(Oddington)/I’ll Go Enlist(Sherborne), exuberantly arranged by Decemberist accordion player, Jenny Conlee, is exactly what a couple of old Morris tunes should be – fun. There are so many good tracks on the album that this could turn into a very lengthy review if it covered every one but there are a couple more that deserve special mention. Flash Company is a particular favourite – a rousing tale of a misspent life. Offa Rex put real verve into it and, in the process, produce an arrangement that hints at Americana/Country on a very English folk song, made even more international by Australian musician (and fabulously named) Mirabai Peart, who’s viola playing and backing vocals are a big contribution to the overall sound on this track.

The final track that deserves a special mention is Sheepcrook and Black Dog. Offa Rex take Steeleye Span’s version of this song and turn it into some wild mutation of English Folk and Heavy Metal – and it works, gloriously! Olivia Chaney’s beautifully phrased voice soars above the guitar playing of Colin Meloy and Chris Funk as they look to tap into their inner Tony Iommi! It brings a smile to the face and more than a little joy to the heart. Folk/Rock is very much alive and well on this first outing from Offa Rex.

And that in itself begs a question. Is this a one off or is there more to come from this pairing? Offa Rex are touring in the States at this moment, then The Decemberists will be touring through August – with Olivia Chaney as their support act and with the promise that they’ll get together to perform some Offa Rex tracks at some point in the set. So it seems that the collaboration means a lot to all involved and I guess it will be the success, or otherwise, of this album and how audiences react to the live material that will determine what happens in the future. If this was the ’60s or early ’70s there’s no doubt that Offa Rex would be talked of in the same breath as Fairport or Steeleye Span. Are we ready for another great Folk/Rock revival? It would be nice to think there’s more to come from Offa Rex.

A great collaboration sees classic Folk/Rock back in the spotlight.